Share All sharing options for: The 100 Habs Goalies Braincramp! 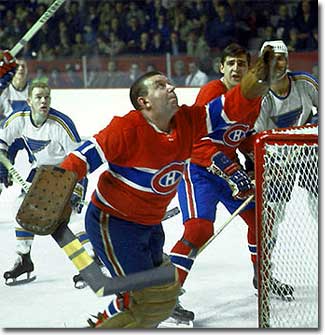 Like the ol' Gumper here, I went stretching for something way out of reach!

I'm a dumbass fool for it, too!

I just spent the better part of day researching a story that didn't exactly exist.

You see, I read tons of stuff each day, and it is quite impossible to commit everything to memory. I happened upon a story of the Canadiens newest goalie aquisition, Michael Leighton, a week ago. I didn't read the whole article, as I was searching for some other piece of information.

I just cut and pasted the link somewhere then forgot all about. I figured I may or may not get around to it - possibly only if Leighton played a game.

In glancing quickly through the piece, I believed I'd read that Leighton was the 98th goalie in Canadiens history. Only days later did this little factoid make an impression onto my brain.

"Hey", I thought to myself, "If the Canadiens goaltending scenario works out in such and such a way, prospect Carey Price might well become the Habs 100th goalie to appear in a game in the teams 100th year anniversary in 2009."

My mind juggled the "what if's" of the idea and came to the conclusion of "what a cool idea for a post!"

While the Price reality might not have played out in such a way, I was going for it regardless.

As the ideas for the post accumulated, I decided I'd somehow string off all these goalies from the last hundred years and make the post a complete type of thing. With a notebook handy, I furiously began jotting down names of all those I could remember and came up with 39. I think I missed only 5 names between 1970 and the present. I was on a roll.

I heard a little voice inside my head telling me something was amiss but forged on anyway. I'm kinda conditioned to ignore that shit!

I got online late last night and started searching through the era's for those names gone astray.

One particular goalie site gave me everything I needed chronologically back to 1917, the Canadiens first season in the new, at the time, NHL.

I thought I had everyone I was looking for!

When I counted them up, I only had 70 goalies. Oops!

Now I know my Habs history pretty darn good - good enough to know that Georges Vezina, the man who gave his name to the trophy, played virtually every game from 1910 to 1926.

My fears were confirmed, Vezina has missed but a handful in which 5 others nameless goalie became Habs in the 8 years of NHA play. One was a forward named Ernie Dubeau, who played all of two minutes in goal in 1913-14, while Vezina was likely being patched up.

"Perhabs the total includes goalies such as Leighton who've dressed but never appeared in a game", was my next thought.

I enlisted the online help from my buddy Shawn who found me all the NHA stats I needed.

Meanwhile I chased down the Leighton article to doublecheck the 98 goalie fact. I found where I pasted 3 Leighton related links, none of them being the story I was quoting from. A little while later, I had it.

Much to my dismay, there it was on the page, that Leighton was in fact only (if he plays) the 74th goalie in Canadiens history.

I'm not exactly sure what type of braincramp I had to make me think there could even have been 100 goalies in 100 years.

Did I feel stupid?

Does Dolly Parton sleep on her back?

My only consolation was that I found 1 more goalie everyone seems to have forgotten about - Ernie Dubeau!

Being a stubborn one, I'm still going to post that darn 100 goalie thing, even if there's just 75!

Later today, if I'm not feeling too stupid!