Share All sharing options for: "It's My Turn To Score..." 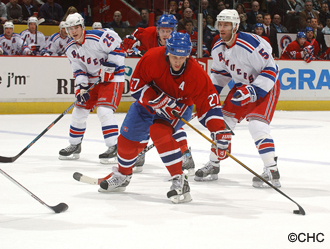 Even though the toughest games are yet to come for the Canadiens, with first rate opponants in the Senators Friday, and the Sabres the next night, Guy Carbonneau's players have every rightful hope of making the playoffs based on the positive roll the team has been on for a good two weeks now.

After the teams youngsters set the tone for earlier wins, the veterans have now followed suit. Coming quickly to mind, is one Alex Kovalev, architect of back to back two goal games, and Saku Koivu, with 4 assists against the Rangers, and a goal and 9 helpers in his last seven games.

It is well known that when the two K's are in full fledged mode, the Habs roll like a well oiled machine.

The Canadiens, to make the point, have scored 16 goals in their last 3 games!

Kovalev is enjoying the opportunity to silence critics, by helping the team make the post season.

Carbonneau stated after the 6-4 win over the Rangers that this is Kovalev's favorite time of year.

That's all well and nice, but why doesn't our enigmatic number 27 always approach games with the same determination and desire as he's shown in past two games? Such is the constant mystery of the man.

If Kovalev played in this manner all season, the Canadiens would have already clinched a playoff berth.

We've seen Kovalev attack the net against the Rangers, scoring both goals in an umfamiliar spot for his of late. He had developed a nasty habit of toiling on the periphery of the play, often firing pucks from a distance rather than in close.

Recently, it is as if he has decided to accept paying the price to score.

Yesterday, as players took in an optional skate, Kovalev explained what has been going on with him.

While maintaining that he hasn't done anything particularly different or special of late, Kovalev said that he isn't "working any harder than usual."

"I'm giving my all to help the team make it. This is the best time of the season. Earlier on, other players were scoring while I wasn't, now it's my turn to score. It's good for the team, and basically hockey is a team game. Everyone is contributing now and the team is winning."

Kovalev was not available to the media after the Ranger game, as he was being attended to by the medical staff, who were working on the cut he received above his right eye.

"I was cut right before scoring my first goal. It's nothing serious, it had just become swollen."

The 34 year old Russian explained why he seemed to be going toward the net more of late.

"Earlier on, I was often in the wrong place at the wrong time. I was trying to be patient with the puck and make plays, but the puck would be playing tricks on me."

"Now I head straight for the net, the thinking is that my linemates, Maxim Lapierre and Guillaume Latendresse, will get the puck to me, or I can jump on a rebound."

Kovalev says that there is good complicity with the two youngsters, even though he's scored three of the four goals alongside of Koivu and Michael Ryder on the powerplay.

"I try to help the two young ones out, without giving the impresssion I'm putting on a hockey school. My only goal is to make the line have success.

Kovalev has decided to put a cross on events beyond his control that he was involved in during the past month.

"I don't even want to talk about that. I just want to concentrate on making the playoffs."

He admits to being very primed in this crucial games. "It's very invigourating to be in this situation, where the games have a big outcome on the standings. You'd think we were already in a best of seven series since the wins are so important in the next 4 or 5 games. The crowd at the Bell is incredibly loud. Its a great stimulant for the team."