"I Shared My Husband With The Public" - Elise Beliveau

Share All sharing options for: "I Shared My Husband With The Public" - Elise Beliveau 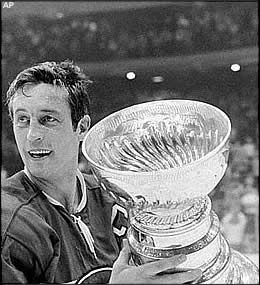 Elise Beliveau met the man of her life on the occasion of a blind date organized by a group of her girlfriends who were so completely taken with an 18 year old Jean Beliveau, a star at the time with the Quebec Citadels, that they could not approach him themselves.

Mrs. Beliveau says without a hint of shyness, that she was being used that day.

The girlfriends were trying to find a way to invite Jean to a dance, and Elise was the only one of the bunch who had a vehicle. It seemed like the best way, to have her chauffeur him there.

"I didn't even know who he was!", she recalled, smiling. "My friends were just in love with him. They all wanted to go out with him. They asked me to accompany Jean to the dance. I was doing it for them."

Both Jean and Elise were 18 at the time. She remembers that he seemed very timid that night, speaking little. Not a very good dancer.

Once the night was over, Jean looked around as everyone was heading off, as if to suggest, "Well then, who am I following with?"

At that moment, Elise found her nerve. "You, you're coming with me!"

Elise will again be at his side tonight as the red carpet of the Bell Centre unfurls on the occasion of the social event of the year in Montreal, namely "A Tribute To Jean Beliveau." The event is said to be raising over one million dollars, to be split amongst 6 hospitals and charitable foundations.

Prime Minister Harper, and Quebec premier Jean Charest will attend. Legends from the Canadiens will be there, most notably Dickie Moore, in his first public appearance since being involved in a car accident that came close to claiming his life a few months back.

Elise's night of dancing with the star of the Quebec Citadels, of course, contributed greatly to radically changing the course of her life. Two and a half years after the chance historic meeting that made her friends drool in envy, the woman married her Prince Charming. That was almost 54 years ago.

She remembers what she immediately liked about him that night. He seemed like a good guy, with a solid head on his shoulders. "A fine man", is how she called him.

Not much about him has changed since according to Elise. He has remained exactly the same man she's always known. Straight as an arrow, polite, honest, and a man who in over fifty years has never cheated or deceived his family or his public 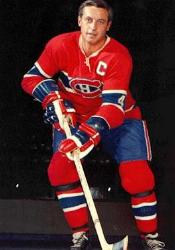 
Le Gros Bill became one of the biggest personalities in the history, not only in sports, of Quebec. A strong character, without a speck of dirt on him, he could have been Canada's Governor General had he chosen so.

What does it mean to spend over 50 years alongside a man of such integrity, who has watched over every part of his public image, with an extreme attention to detail? A man who would never accept that anyone tarnish his reputation?

Has Elise Beliveau, a woman who enjoys a laugh and a good time, who qualifies herself as a partier, ever felt trapped by the lifestyle and image of her illustrious husband? Has she suffered in silence, with an inhibition to just let loose, like she did back in the wild days when they first met?

"When you're younger, a lot crazier, it's quite alot to have to concern yourself with such things as image, but I can't say I've ever had any problem with it."

Their only daughter, Helene, found out early just how particular her father could be when it came down to the details, image wise. She was maybe 16 or 17, an the occasion was a teenagers party in the home.

When the parents arrived home, Beliveau immediatly set his gaze upon a case of Labatt's beer. A riot act was read upon the discovery by the man who had been for all intents and purposes, a lifelong employee of the Molsons Breweries.

"I thought he was going to go into cardiac arrest", laughs Helene, remembering it today. "He was all worried about what everyone would think. He could not comprehend that there was no way I could have known this, being all of sixteen at the time."

Elise recounts that her famous hushand was also quite consciencious of what went on around him. He's never had to work on any image aspects. He is much like his own father, Arthur, who was always a kind and peaceful man.

"For Jean, being that way, the way that he is, is completely normal behavior. He just enjoys people. He's patient around people and patient with me. He has a heart of gold. He wouldn't harm a fly. I have never once heard him say a bad word about anyone, and that includes what is said inside the four walls of our home. He's just not that type. He never sees the bad in anyone.

There are advantages to being the wife of Jean Beliveau. Elise admits to having had a wonderful life. Her only regret would be that she wishes she had spent more time with him over the years.
"Jean belongs to the public", she says. "We've had great times. We have travelled alot and met many interesting people, but at the end of the day, I have shared him with the public."

When Beliveau's wife and daughter are asked to speak about the man, one doesn't get the impression they have much to add to what's already known of the man who has watched over his family, and his two grand daughters, Mylene and Magalie, who hardly knew their own father, a policeman who took his own life.

That he's so well known, doesn't stop them from speaking with great admiration of him.

"He has many" says Elise, without hesitation. "His patience is always impressive. He has a heart of gold. Anything that he can do for anyone, he does it."

"His biggest quality is his generosity", says Helene. "His four girls, as he like to call them, have surely benefitted."

But doesn't he have the right to have a fault or two?

Elise thinks about that for a second, reflecting on the notion, but doesn't come up with much.
Perhaps age has made him a touch irritable at times, is all she suggests.

"Other than that, I dont know that he has any faults", she adds.

Helene, on the other hand, is totally perplexed at the question.

"A fault eh?...Hmm. A fault", she murmurs."It's ridiculous, he has to have one! I'm stumped, I can't think of one. It's impossible that my father doesn't have at least one. The only answer that I can offer, is that his qualities are so large they overwhelm his faults. I'm trying to recall the last time he got on my nerves. Just like that, I can't recall anything."

It is strange, noticing that the image Beliveau has cultivated in the public eye and in the media, is no different than how he's perceived by those closest to him.

Considering all of his athletic achievements, his community work, his spotless reputation, his generosity, and his legendary goodwill, could Beliveau really be Mister Perfect?

"I never really looked at it that way, never saw it like that", says his daughter, "I'm almost inclined to say you're right!"