Habs in the driver's seat

Share All sharing options for: Habs in the driver's seat 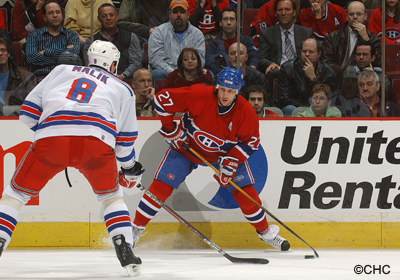 The Montreal Canadiens were hoping for some outside help in their playoff drive and they received it from teams in the lower echelon of the Eastern Conference standings.

Tuesdays 5-2 Florida win over Tampa Bay, helped the Canadiens gain a seventh place tie with the Lightning, two points up on the Carolina Hurricanes, who were seeded ninth. With the 'Canes 5-1 loss to Philadelphia Wednesday night, the Habs became the beneficiaries of a slight cushion in the standings.

Hey Philly and Florida, we owe you one!

What this does for the Canadiens, is provide them with a small margin of error, namely one loss in their final 5 games. Prior to these unexpected wins by playoff also-rans, the Habs would have needed to pull off wins in all 5 of their remaining games to make the post season.

Hopefully, they do not fall asleep on this cushion of a gift from above - or below!

The key to Habs standing is the wins column - the first in any tiebreaker format. As the Canadiens have 40 wins with five games left to play, their recent win streak has clearly placed them in the drivers seat. Should they win them all, they are in the playoffs. No tiebreaker or three point scenario's can undo that fact.

All three teams are 2 points back.

No need to remind those following this impassioned race that the Habs last regular season game is in Toronto against the Leafs.

Here's hoping it's a meaningless tilt at that point.

While a Montreal loss or two could shuffle the perspectives, their wins in hand, if you will, might become the difference. In other words, if the Canadiens maintain the margin of more wins than the others until that last game, that dreaded Leafs contest would be without meaning.

The Habs would need four wins to eliminate all three teams, while three wins cooks the books for the Leafs and Isles.

Should Montreal go on to win 3 of 5, and Toronto win all six of their remaining games, including the last game against the Habs, Montreal's season record versus the Leafs, would give them the nod in the 2nd tiebreaker of the formula.

The Islanders would need to win all 6 remaining games, with Rick DiPietro on the shelf, and hope the Habs win just 2 of 5 to skip ahead of them.

Carolina then becomes the prime concern.

As both teams have five games remaining, 4 Montreal wins does the Hurricanes in - the wins column tilting in the Habs favor. Should the Canadiens win only three, Carolina would still need to win all five of their games to pull ahead of the Canadiens, as 4 wins by Hurricanes, in the event of a point standings tie, would still leave them with one less win than Montreal.

Should the Canadiens and Hurricanes deadlock in points and wins, Carolina would then advance ahead of Montreal as they have won 3 of 4 regular season meetings.

It might not get that far as the Hurricanes schedule is a tough one. Home and away games against the Lightening, themselves fighting for a slipping spot, another home and away set with the prickly Florida Panthers, and a tilt with playoff bound Thrashers might just well undo the defending Stanley Cup champs with one untimely loss.

Montreal faces Ottawa Friday on the road, and Buffalo at home the next night. They meet Boston for their final home game before taking on the Rangers and Leafs on the road in succession, in what might well become meaningless games should they win the first three and anyone else lose.

For the record, Tampa Bay, who have one win more than Montreal and sit 7th, have a pair of tilts against Carolina at home and away, with Washington at home between those games. They end their season with a home game against the Panthers before finishing up in Atlanta.

All in all, for the Canadiens, acceding to the playoffs is all about three wins in the five remaining games.

This coming weekend's back to back Ottawa and Buffalo games are crucial. One win in either is a big timer. Should they win one of those, they would then face a lame duck Bruins team, then games against the Rangers and Leafs that could hardly matter.

I do, for the simple reason that none of the Canadiens last five opponents are as desperate as they are!

Here's hoping the seize what is before them!