Share All sharing options for: Guillaume Well Grounded For Success

Early comparisons to Crosby did little to faze Habs winger 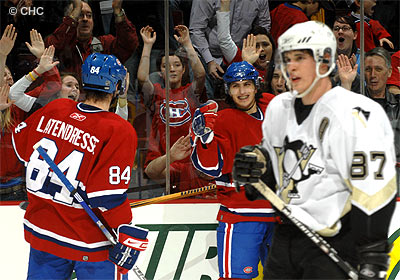 With Guillaume Latendresse having scored four goals in his last three games, many are mentioning that he is beginning to come into his own, as an NHL force. The Canadiens forward is playing with the same confidence he displayed as a 16-year-old junior with the Drummondville Voltigeurs, four seasons back.

His prowess at the time led many to measure him against another 16-year-old making a name for himself in the Quebec league.

Sidney Crosby and Latendresse were the first two players chosen in the Quebec Major Junior Hockey League draft in 2003. They were also drafted into the NHL on the same day in 2005. The comparisons end right there.

At that time in 2003, Crosby was destined to become the NHL's best player over the course of the next 15 years. Two season in, he's already there.

Latendresse, on the other hand, will one day be regarded as one of the better power forwards in the league with the Canadiens. He is a player whose usefulness to the team will take on greater importance as time passes, without a doubt.

During his first training camp with the Canadiens, it was often brought up that he and Crosby had been the top two Quebec league picks.

While Crosby's second and final season with the Rimouski Oceanic was being played under the national limelight, Latendresse was perceived as being just a few notches below the budding superstar. That could be seen now as pourring it on a little heavy.

A seventeen year old at the time, Latendresse was being interviewed by Bertrand Raymond of Le Journal De Montreal, when he initially set the record straight in regards to comparisons to Crosby.

"People suggest that I'm playing in Crosby's shadow", said the big winger. "That's so false, there is an ocean of difference between the two of us."

The quote was hardly an attempt by Latendresse to rid himself of unwarranted pressures. He was simply being realistic.

Crosby is the beneficiary of every God-given talent and skill a hockey player can have. When one is 19, and on ice feats and accomplishments are comparable to Wayne Gretzky's, it is because the player can do it all on an NHL ice surface.

"He's way better than I am", said Latendresse, without needing to make the point. "He's in a class by himself. I never played in his shadow in junior, I just stuck to applying myself to the things I needed to improve upon."

"Certain times, there are little things that account for players progressing more quickly than others, while in other circumstances, some players take steps back", he observed. "Sidney, in junior, continued to become exactly what was foreseeen for him to be. Myself, I slowed down some."

The Canadiens rookie has changed alot since then. He has worked doubly hard at getting through those setbacks to be where he is now. The Canadiens organization is quite pleased with the progress made by the player. He has matured a great deal in the space of two seasons. He has become more at ease on the ice.

In the Canadiens last game against Crosby in Pittsburgh, in early Febuary, Latendresse with a little luck, could have notched a pair of goals. He was constanly in the right position, slotted in the crease and open, without the puck finding him.

Crosby, of course, was putting on a show that night. Regardless of the incident with Maxim Lapierre that opened the game, the one in which Crosby made a simply shove appear as though it was a shotgun blast to the heart, he was in top form.

The Penguins phenom didn't score that night. He settled for three assists in picking apart the Canadiens.

The young Penguins squad have all the tools, especially on the power play, to put away any opponant in minutes. With Crosby leading the way, it is a scene that will play itself over in Pittsburgh for years to come - likely culminating in a Stanley Cup sometime in the not too distant future.

No one is predicting the same glory for Latendresse in that space of time. But time and only time, will make Latendresse an impact player in his own right.

There could not have been two Crosby's in the 2005 draft. However, with the rapid progress being made by Latendresse, it could be said that as the 45th pick overall that year, the burly Habs winger has been one of the steals of the draft.

The same claims could also be made for Anze Kopitar, taken 11th by the Kings and Paul Stastny of Colorado, who was snapped up in the pick just proir to Latendresse.

The Canadiens did well to flip-flop draft choices with Rangers upon the occasion of seeing Latendresse available so late in the pecking order.

Of the 60 players chosen in the first two rounds, ten were made from the QMJHL. Apart from Crosby, only Latendresse and Marc-Edouard Vlasic with the San Jose Sharks have made the jump to the NHL so far.

Two other prospects outside the QMJHL sphere have made small noises in the pro's so far, at 19 years of age. Benoit Pouliot with Minnesota and Gilbert Brule with Columbus Blue Jackets, picked 4th and 6th respectively, are seemingly behind Latendresse's development at this point.

Other bona fide's in the 2005 draft have already been traded. Jack Johnson, chosen 3rd by Carolina, is now L.A. Kings property. Ryan O'Marra, taken 15th by the Islanders, is now an Islander, from the Ryan Smyth trade. Ryan Parent, went from being a Predator to a Flyer in the Peter Forsberg deal.

It is doubtful that they have endured close to the same pressure and scrutiny Latendresse has, in first being compared, somewhat misguidedly, to Crosby, and then by annointed the French superstar heir apparent in the media mad Montreal hockey mecca.

That Latendresse has achieved 15 goals in a Montreal uniform by the age of 19 bodes extremely well for his future.

Rarely has a rookie appeared on the scene with such composure and maturity. His few critics should take note.