Share All sharing options for: Great pieces of hockey memorabilia at Classic Auctions 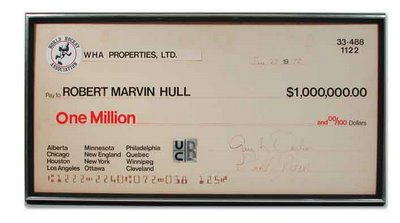 (Note - This is a posting for my Dad, who might not realize what a tremendous appreciation for hockey's history and origins he's passed along to me. He did this without a single item of hockey memorabilia to him. It was just good old time well spent, great stories of character players, and a constant twinkle in his eyes. Thanks a million, Dad! This one is just for you - hope you like it.)

Anyone who is a hockey history buff could lose themselves easily in the Classic Auctions Hockey section. There are thousands upon thousands of pieces of memorabilia on display. While many of the goodies shown have been sold, they are still posted and there to be admired. The collections of NHL greats such as Guy Lafleur, Bobby's Orr and Hull, Maurice Richard, and Jacques Plante have been sold here, as well as many pieces from some of the game's lesser knowns from Rene Robert to Bill Cowley. Hockey executives such as Alan Eagleson and others have posted collections of pieces in the hundreds.

The featured pieces cover all of hockey's eras from the early 1900s to the present.

Defunct NHL teams such as the Minnesota North Stars and Cleveland Barons include many artifacts such as player contracts and game worn jerseys as well.

The site allows viewers to enlarge each item photo for close up looks, and gives detailed description of the collectibles.

The 30 or so pictures below are just a small scoop of what you'll find.

This commemorative program from the 1972 Summit Series, was published by Esso, if I'm not mistaken. This is from Alan Eagleson's collection and is signed by 29 players. I have one of these somewhere, though I may have (idiotically) given it to someone as a gift somewhere along the way. 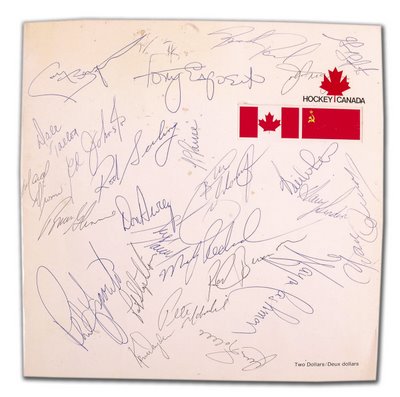 One of Wayne Gretzky's many promo's, this 7Up poster was one of his first endorsement deals. 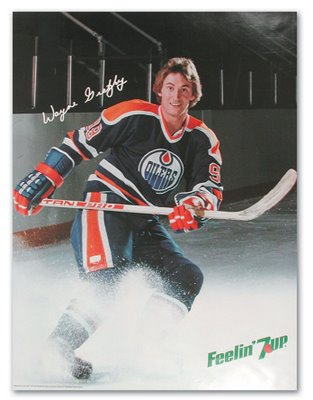 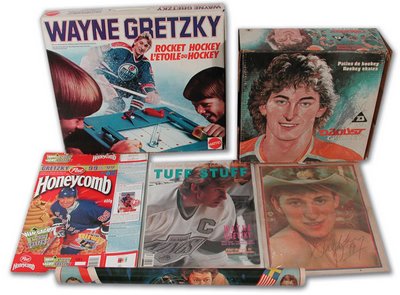 Back in the 1930's and '40's, hockey images adorned tabacco cans. That's a long way from Gatorade!

The Canucks captain Orland Kurtenback wore this Molson rendered jersey in 1970 pre-season games for Vancouver. Molson is not the equivalent of Red Bull, except when blogging! 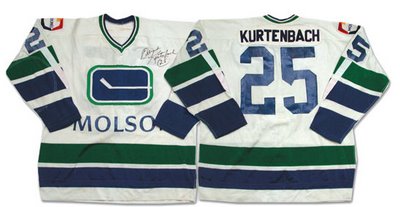 The jersey of my childhood dreams, a 1972 game worn Guy Lafleur. Now if I was a rich man, my collection would start here. 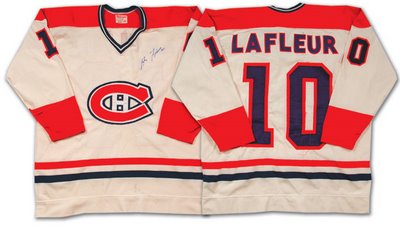 Guy Lafleur flogged a few products in his time. This stuff was considered Viagra for women back in the day. 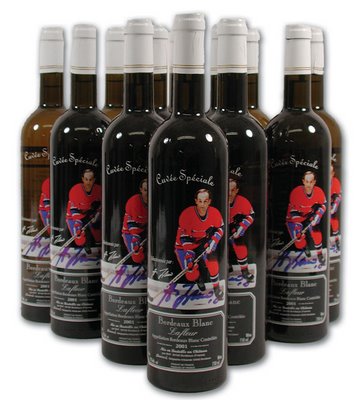 Cleaning out his closet one day, Le Demon Blond found this Harley Davidson to add into his auction. 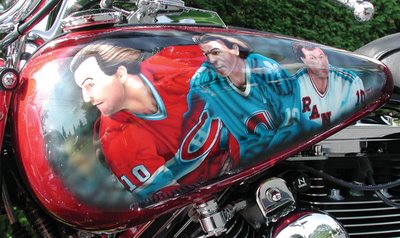 There are several collections of Toronto MapleLeafs calendars from over the years in the auction. These are two of the more ancient and beautiful ones. 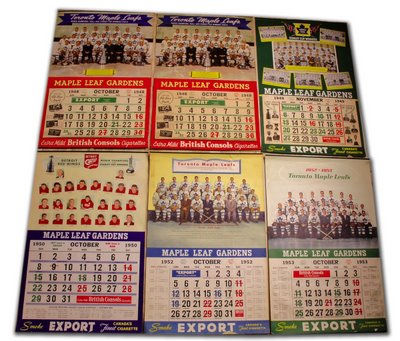 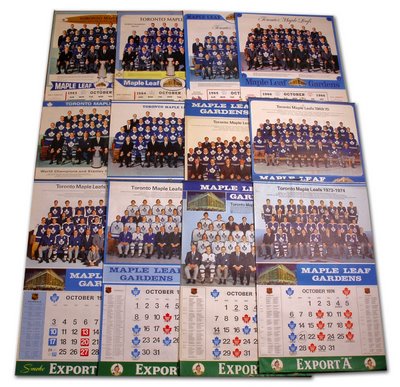 This is a letter from the mid 1930's from NHL President Clarence Campbell notifying that the Maroons franchise has been terminated. Notice that it is marked "The Philadelphia Maroons". 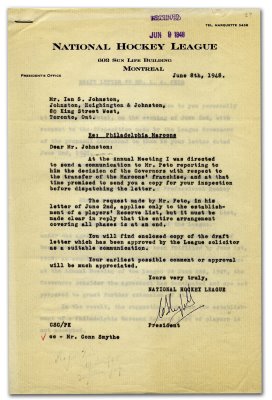 This document is the minutes of the meeting between the NHL's Board of Governors that terminated the Maroons. 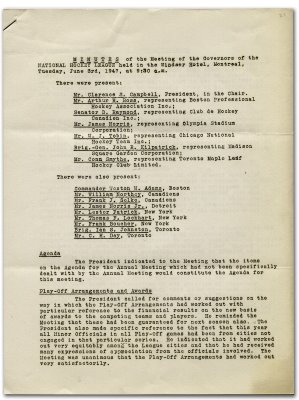 A plaque made by a fan on the occasion of Howie Morenz funeral at the Montreal Forum. It is said that the accompanying photo is the only known shot of funeral inside the building. Below the plaque is the article contained within that appeared in the Montrealpaper the day following. 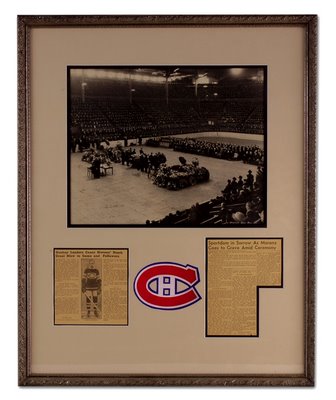 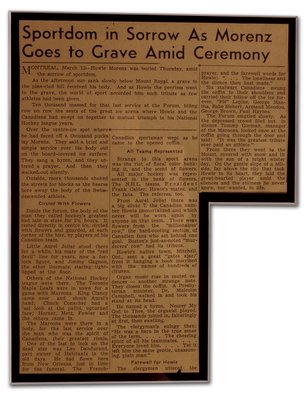 A gold puck given to Alan Eagleson by Bobby Orr. I'd bet he wishes he could have it back! 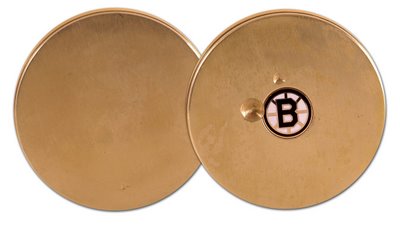 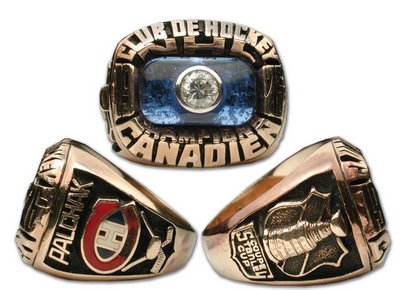 The backside of some 1954 classic Parkhurst hockey cards. I believe the fronts are on the other side! 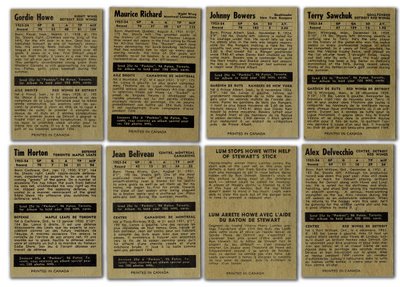 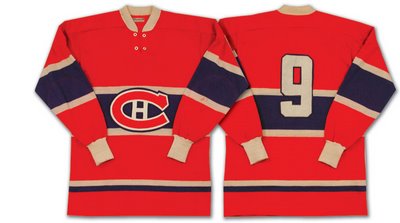 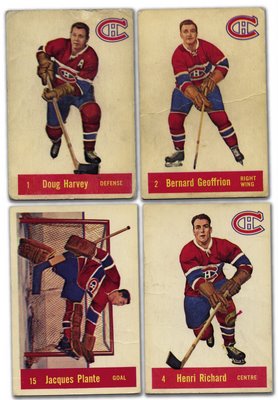 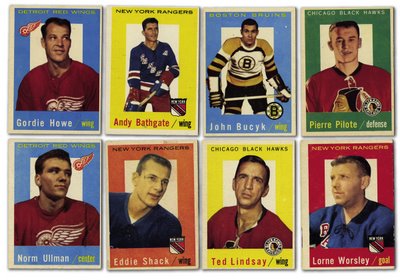 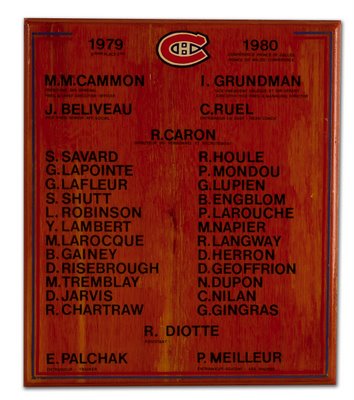 A colour photo, rare for its time, of the 1905 Ottawa Silver Seven. 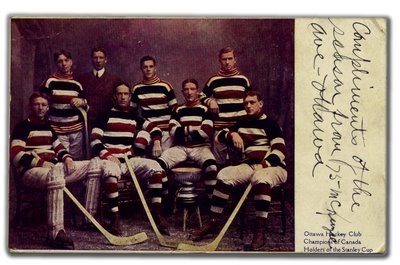 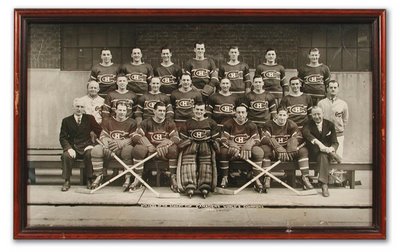 A panoramic photo of the 1934-35 edition Montreal Canadiens. 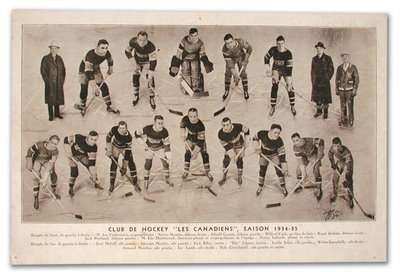 Some game programs from the Montreal Forum in 1932. 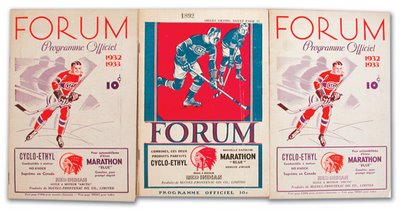 A signed program from the 1937 Toronto Maple Leafs. 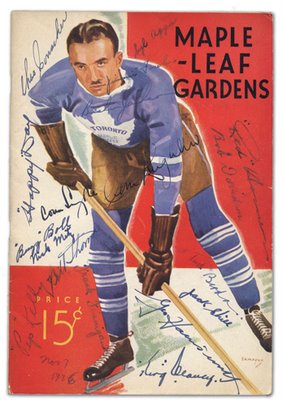