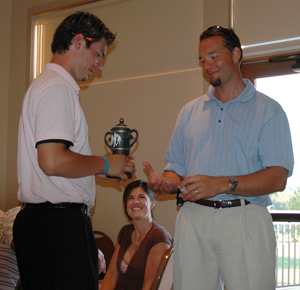 (Note: A commenter of this piece has linked to my Habs 75 goalies post from a few days back. In case anyone has missed Stubbs' articles, both sections of it are reprinted below. Following the Gazette link will provide additional Kolzig audio. Stubbs also wrote on Price back on March 13.)

Washington Capitals goaltending star Olaf Kolzig, who made 36 saves in his team's 4-1 loss to the Canadiens' victory on Saturday, is in a unique position regarding Montreal blue-chip netminding prospect Carey Price.

In the fall of 2004, shortly before he purchased a large piece of the Western Hockey League's Tri-City Americans – Price's junior team the past four seasons – Olie the Goalie spent several months working on and off the ice with the 17-year-old.

Kolzig now hears the suggestions coming from many corners that Price might well be in the Canadiens net as early as next season, and he recalls his own experience, stepping from junior directly into the NHL – for a very brief spell. 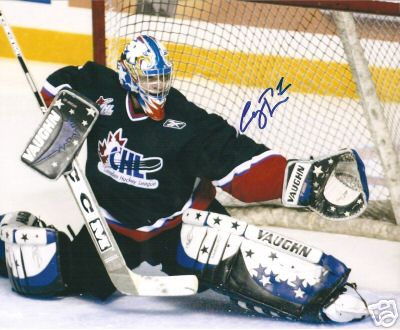 An update: Price was named first star in Saturday's 2-1 Tri-Cities victory over the Seattle Thunderbirds to tie at 1-1 the best-of-seven WHL divisional semi-final playoff. On Friday, Price made 30 saves and was beaten just once in the 2-0 series-opening win for Seattle, the Thunderbirds' second goal coming into an empty net.

A junior with Tri-Cities in 1989, Kolzig began that season in Washington, playing two games for the Capitals just months after being their first-round (19th overall) draft choice. He was returned to the Americans to finish up the year.

Kolzig spent the better part of the next four seasons in the minors, and while he doesn't recommend that kind of stay for Price, he wonders what's the rush to get the promising youngster into the NHL, before he's seasoned a little as a professional? 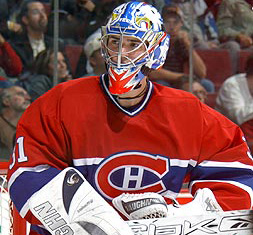 Red, white and blue-chip goaltending prospect Carey Price says he’s coming to the Canadiens training camp next fall to earn a job in the Montreal net.

Don Nachbaur, Price’s coach with the Western Hockey League’s Tri-City Americans, believes his junior star could make the huge leap to the NHL in a single bound, without benefit of seasoning in the minors.

But Washington Capitals goalie Olaf Kolzig, while hailing the 19-year-old’s physical gifts, mental strength and the poise he showed in leading Canada to January’s world junior title, is a slightly leaky, quite sensible cloud over the Price parade.

A 15-season NHL veteran and co-owner of the Americans, his junior alma mater, Kolzig questions the rush for Price to be thrust into a Canadiens net.

"Montreal has a different set of pros and cons than 29 other NHL cities – the history of goaltending here, the scrutiny and the pressure," Kolzig said Friday over an hour-long coffee at the Capitals downtown hotel.

"Carey has the physical ability to make the Canadiens, there’s no question. And while I think he could handle the pressure well, it might be too much, too soon. I don’t see him making the team here next year because of all the other things that go with being a goaltender in Montreal."

Kolzig has played his entire pro career in the Capitals organization, drafted in the first round, 19th overall, in 1989. He began the 1989-90 season with the Capitals, playing two games before being returned to Tri-Cities in upstate Washington.

It was another three years before he’d be back in the NHL for a snack, five before he had a main-course taste following stints with four American and East Coast league teams.

But Kolzig, 37 next month, believes that two championships he won in the minors built the foundation for his NHL career, which has earned him two all-star games, the Vézina Trophy, a trip to the 1998 Stanley Cup final and legendary status with his adoring Capitals fans.

"Goaltending is the hardest position to make the jump (from junior to the NHL). You don’t realize how big it is," he said. "It’s one thing to impress over a month, but it’s totally different to do it over a full year.

"There’s the skill of the players you’ll face night in and night out, the pressure of being paid to perform your best every night. There’s living on your own, managing your money, doing the everyday stuff as an adult that a kid takes for granted.

"I’m an old school guy, and I think that everybody, no matter what level – with exceptions like Sidney Crosby and Alex Ovechkin – should spend at least a year in the minors to go through that grind so that when you’re in NHL you really appreciate where you’re at." 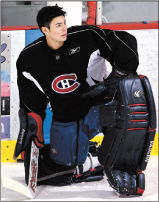 This said, Kolzig is dazzled by what he’s seen from Price, the Canadiens’ first pick, fifth overall, in the 2005 entry draft.

They first met in September 2004, during the NHL lockout when Kolzig fine-tuned the 17-year-old native of Anahim Lake, B.C., for a few months.

"My first impression was:’Whoa, this kid’s going to be great, he’s head and shoulders above where I was at 17,’ " recalled Kolzig, who came to the net by chance at age 10, earning a shutout in his first game.

"Then there’s his demeanour. To me, that is what’s going to make Carey very successful, especially in Montreal. He doesn’t get too high or too low."

Kolzig worked on Price’s fundamentals, teaching him that no matter his quickness or glove skill, it’s the basics around which a goalie builds his game.

The two drilled footwork; Price was strong moving one way through the crease, but a little off balance the other.

"Even with the talent and the future he has, Carey showed me a great deal of respect," Kolzig said, praising the mentoring of Price’s father, Jerry, a former minor-pro goalie and 1978 Philadelphia Flyers draft pick.

"Mostly I was there as his big brother and to help him keep any kind of slump from lasting. I gave him some mental tools he could use so that if he ever got into a funk, he could get out of it more quickly.

"There are so many goaltenders who, on talent and skill level, should be here ahead of me. I worked on the mental side of it, and having that belief in yourself makes a world of difference. The only way you’ll succeed is with what you have between the ears."

The Americans considered trading Price before this season, realizing the goalie’s value in his final season of junior eligibility as his team headed into what seemed to be a rebuilding year.

But GM and Western Hockey League executive-of-the-year Bob Tory engineered a few shrewd deals and the Americans enjoyed a club-record season, finishing at 47-23-1-1.

Price, 30-13-1 with three shutouts and a save percentage of .917, last week was named top goalie in the WHL’s Western Conference for 2006-07, and now has his team in a first-round playoff series against Seattle.

Kolzig keenly follows the team online and hopes they’re still in action when he goes west to join them in a few weeks.

The franchise was on thin ice in 2005 when then-co-owners Brian Burke and Glen Sather announced plans to move it to Chilliwack, B.C. That was shot down by league governors, though the two were granted an expansion team in Chilliwack.

Kolzig, with Dallas Stars friend and former Americans teammate Stu Barnes, stepped in. Both have offseason homes in the area and they arrived as badly needed local ownership, co-presidents with a commitment to the club’s long-term future.

"It’s been great, but I haven’t been able to be there and be involved. That’s for when my career is done," said Kolzig, who figures he’ll play until he’s 40.

"I’ll be more hands-on, learning the business, finding a way to market and improve the junior game and attending meetings."

On the buses again?

"No," he said, laughing, "scouting peewee games in Manitoba doesn’t interest me."

But Kolzig will watch the progress of Carey Price with a sharp eye, aware that he might see his junior-team superstar at the opposite end of an NHL rink before his own career is done.

"I’m amazed I made it through one NHL game, my goal when I was drafted," he said, now two games shy of 700. "But I’ve always believed in myself, and that will be my advice to Carey.

"I’ll tell him, ‘Don’t believe everything you hear, good or bad. You’re not always as good as people say you are, and you’re never as bad. Just believe in yourself, and draw on what you’ve done.’

"Carey will have some experiences that he probably won’t like, but they’ll make him stronger as a person and a goaltender. He should enjoy the game and absorb the history, especially in Montreal. This is an unbelievable city."