Share All sharing options for: A Desperately Needed Boost 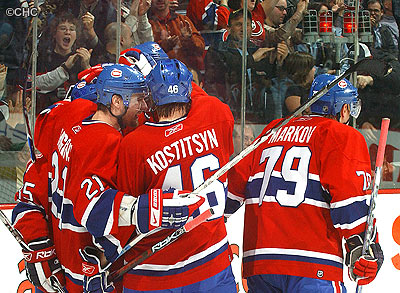 What a sweet win for the Canadiens over the New York Islanders tonight!

With every game being an almost do or die affair for the Habs of late, it certainly was good to see them sensing desperation in each shift. The 2 points gained do not lift the team in the standings but does tighten the race up very snuggly, as 5 teams are but a pair of points apart in a 7 to 11th place logjam.

Instead of a game analysis or period breakdown, here are some of my random thoughts on the Canadiens these days.

Best news in a while is that Cristobal Huet is skating and may play before the regular season is up. Without him, I do not beleive the Canadiens can achieve the post season, nevermind having a shot at upsetting what would be a first round opponant in Buffalo or New Jersey. I'm actually stunned that David Aebischer, and the nervous wrecks that he creates in front of him, have been able to string back to back wins against tough teams this week. I was actually hoping to see Michael Leighton get the nod between the pipes - thinking there's little to lose in that move.

Aebischer is still letting in at least two questionable goals per game at crucial times, but at least he has minimized the back breakers he'd been prone to giving up of late.

While Leighton backed up Aebischer for a second consecutive game, a start may not even be in the cards for him considering that the Habs official site referred to him as Michael Creighton in their post game wrap up.

When a team is in it's desperate final games of a season, struggling along, it is usually veterans grabbing the bulls by the horn and leading the team towards the playoff goal. Surprisingly, in the Canadiens case, it is the kids pulling the wagon that is getting the job done. Latendresse and Lapierre were integral to Saturday's win and tonight youngsters such as Higgins, Plekanec, and Kostitsyn dug deep while the team was trailing in the third.

Guillaume Latendresse, with two more goals tonight, has reached a very respectable 15 goal plateau as a 19 year old. Had he not slumped recently, he'd be staring down the 20 mark. What's interesting is that Latendresse now has one more goal than so-called resident superstar and 4.5 M dollar man Alex Kovalev, who was off to the sidelines tonight with a case of vertigo. Knowing Kovalev's practicing tendencies, he likely gave it to himself. Hopefully, the case is not as severe as the one suffered by Jeff Hackett a few years back that ended his career.

If Sergei Samsonov were paid to bitch and whine without justification then he'd finally be earning his money. Apparently the player is more interested in causing disharmony and distraction than he is in dedicating himself to the team cause. His always ill-timed declarations, such as his latest rant that he regrets signing in Montreal, do no one including himself, any favors. How many second, second chances does he feel his lacklustre play deserves? Doesn't the fact that the league as a whole ignoring him on waivers a month back tell him that no one is buying his side of the story at all. He has earned his press box seat by doing absolutely everything against the grain in terms of a team concept. Let him rot there.


Best hit of the night - Maxim Lapierre treating David Aebischer like he's Ray Emery and slamming him into the net.

Andrei Kostitsyn looked the part of a first round draft pick tonight, at long last. While few have ever doubted the wingers skill and talent, his adjustment to the NHL game has been taking it's time. Tonight it looked as though he has arrived. The three assists he registered in the third period doubled his seasons point totals in one game. On each of the Canadiens final three goals, Kostitsyn made some pretty nifty moves. On Latendresse's tying goal, Kots was standing at the edge of the crease and faked out Dunham ( or is it that Duh-man ) by firing at a puck that wasn't even directed at him. The move froze the goalie, allowing him to fallprey to Latendresse's shot a split second later. On Higgins go ahead goal, Kostitsyn did a perfect impersonation of a behind the net Gretzky, foiling M.A. Bergeron and flipping a short little pass onto Higgins stick. The behind the back pass to Plekanec on the insurance goal was just candy - highlight reel stuff for sure!

Getting 40 shots against the Islanders shows that the Canadiens are much more capable of offense that they've been giving credit for of late. On most nights, they deserve their criticism for not going all out, but tonight they showed what desperation does.

Many will call tonight's come from behind win "character driven." While the Canadiens have now won 9 times in this scenario this season, putting themselves in this position is hardly "character" at all. "Character" is showing up to win every game. It is getting the lead and rarely relinquishing it. It may on occasion involve bouncing back, but true character is found at the drop of the puck and not 40 minutes into a game.

Damn it sure is nice to write about something positive about the team for a change. Here's hoping that Mario Lemieux takes the Penguins out on the town in the next few days, celebrating the new arena deal, and the all suffer from hangover's Friday night. I'd really like to do this again!