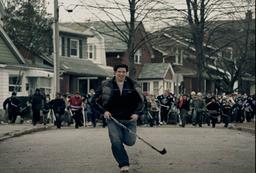 The clip, titled "Breakaway", is a quite a high tech undertaking, and looks at what is going on in Sid the Kid's brain as he is about to go one on one on a Carolina Hurricanes goalie.
The sports beveredge company could not have used Crosby's last goal scored on the Canadiens David Aebischer - you know that 1 against for 4 embarrassment - as the phenom hardly needed to employ any brain power to score it.

In this clip, Crosby is rarely featured except for split second glances of the ice surface, as seen through his eyes. As he dashes and dekes opponants on his way to the goal, the inner workings of his brain are highlighted through a series of actions performed by working crews resembling an air traffic control room and a steel mill drilling operation. The crews interact, mentally and physically, like the neurons and synapses firing the brain, to produce a result.

The one minute ad is highly ingenious, considering the multi skilled Crosby, but it is hardly original.

The scene is a direct descendant from a Woody Allen vignette from his 1972 movie, "Everything You Always Wanted To Know About Sex (* But Were Afraid To Ask)." That scene, featuring actor Burt Reynolds, was also about scoring, in a different way!

The Allen clip, also featured here below, involved the same crew to crew interaction, in conflict with the heart and mind in a moral equation. Instead of a goalie, the desired target is one attractive brunette.
Old time movies being what they are, it is doubtful that anyone under the age of 30 has seen it. I was quite surprised and impressed that You Tube actually has a clip of it. While the scene is shown in its entirety, one only needs a minute to observe the similarities between it and the Crosby ad.

Allen's movie explored the myths and innuendo's of sex, in an almost documentary style, though several vignettes that have a goal of undoing the myths. It has actually been used in certain cases as a sex-ed film. While hilariously funny, it is not out of place in that context.

Heck, I'd even recommend it to Sidney!