Cornwall Is Hockeyville - No Kidding!

Share All sharing options for: Cornwall Is Hockeyville - No Kidding!

From "Newsy" to Chad, Orval to Lori, Cornwall has the Hockey credentials covered, now give us that Hockeyville prize!

With news that the city of Cornwall has reached the top 5 in the Kraft Hockeyville competition, I thought I'd bring some historical perspective on the game's history in our town.

As all Cornwallite hockey fans must know, the roots of the game run deep here. While we may no longer have an OHL hockey club to boast of, our love of hockey manifests itself it many different and positive ways for ciitizens of all ages.

The one thing that always strikes me is how involved the youth in our city are in the game.

For a small region of roughly 50,000 in population, our boys and girls simply eat the sport up.

We have the largest percentage, per capita of children registered in hockey via the CMHA for boys, and the Kinsmen sponsored CGHA for girls. Compared to other cities our size, our hockey playing population dwarfs all challengers in numbers. Add in the fact that the Huron Hockey School has been entrenched in the players development for decades, and one can plainly understand why we not only have the numbers, but we are darn good at the game as well.

The city presently in the grip of Hockeyville fever, also has the Royal Bank Cup on the horizon for 2008, in which the Cornwall Colts will act as the host team for the national Junior A tournament. 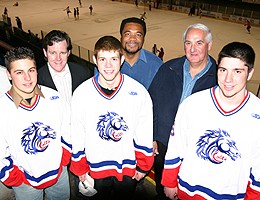 Local sportswriter Todd Hambleton made mention in his column yesterday that Cornwall also boasts one heck of good shinny team.Todd writes that "Other Cornwall Hockeyville angles perhaps got left on the cutting room floor, (of the Hockeyville promo clip), like our flourishing girls' hockey association, or the fact that we have one of the world's best shinny teams. The Cornwall Six-Shooters - Mike Lamarche, Scott Barnes, Harry Marsolais, Rod Lemieux, Yvon Besner and Chris Villeneuve - almost beat the world champs from Boston at last year's international semifinal in New Brunswick."

A pond hockey championship should be worth 100,000 bonus votes in the Hockeyville competition.

Our city's passion for the sticks whacking pucks on ice likely stretches farther back in time than recorded history allows us to view. Going as far back as the early 1900's, the city had a team in the Federal Amateur Hockey League. Two of Cornwall's more reknowned players from the era were Edouard "Newsy" Lalonde and Cy Denneny.

Through the years, many teams calling Cornwall home, played before thousands of fans, providing the thrills that have lined our heritage. There have been, in no particular order, the Cornwall Flyers, the Chevy's, the Aces, the Victorias, the Comets, the Colts, and most proudly, our 3 time Memorial Cup Champion Cornwall Royals.

Cornwall has helped launch the careers of many great players,coaches, and hockey executives into the big leagues.

Surely, from the multitudes, some names are passing me by.

And that's just the boys!

On the girls side of hockey greatness, Cornwall's Olympian Gold medalist Laurie Dupuis has many former and present Typhoons girls in line to assume the mantle of Cornwall's best ever female hockey player. 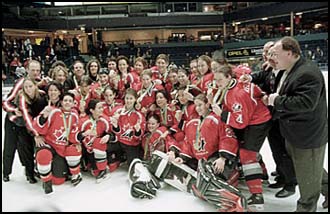 Kilger, who is home grown and bred, carries the current Cornwall torch in the NHL. A highly skilled and useful defensive forward for the Maple Leafs, Kilger has also played for Cornwall's other favorite NHL franchise, the Canadiens. He recently made national headlines by registering the hardest shot on record, 106.1 mph, at a Leafs charity event. Chad was also clocked as the fastest skater on the Buds - no surprise to some of the local boys who go up against him in the off season. 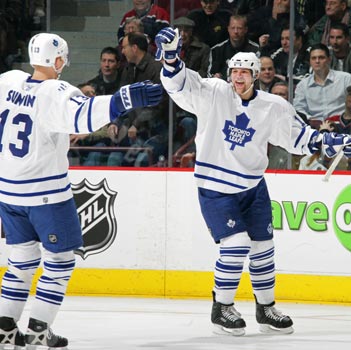 Lalonde, with the Montreal Canadiens, and Denneny with the Ottawa Senators of the day, were not mere participants in the early times of the NHL, but two of the fledgling league's brightest stars. Their accomplishments passed through league records, legendary on ice battles, Stanley Cup wins, to now reside in the history books and the Hockey Hall Of fame for all to be proud of.

Lalonde was a leading scorer for the Canadiens for six years, he served as captain from 1915 to 1921. The tenacious forward with a gift for scoring was a member of the first Montreal Canadiens team to win the Stanley Cup in 1916. Lalonde was scoring champion five times in the NHA, the PCHA and NHL, an unprecedented feat in the major professional ranks and unsurpassed until Gordie Howe's sixth scoring title in 1963. Sportswriter Dick Beddoes once called Lalonde "a survivor of a truly permissive age when hockey was genuinely a mug's racket, mottled with roughnecks who prefered to drink an opponants blood at body temperature."

In six NHL seasons covering 99 games, Lalonde hit for an astounding 124 goals, an accomplishment that can never truly be diminished by time.

From 1910 to 1954, he held the record for the most goals scored by a major league hockey player, including his pre-NHL totals -- 441 goals, a record later broken by Maurice Richard.

In 1950, he was elected to the Hockey Hall of Fame, and the Canadian Lacrosse Hall Of Fame also inducted him in 1965. The Sports Hall of Fame of Canada, in Toronto, acknowledged Lalonde by having him light the torch upon their opening ceremonies in 1955.

In 1998, 71 years after his last game and 76 years after initial retirement, he was ranked number 32 on The Hockey New's list of the 100 Greatest Hockey Players, making him the highest-ranking player on the list who had played in a professional league before the founding of the NHL.

Cyril "Cy" Denneny, nicknamed the "Cornwall Colt" was born in nearby Farrow's Point in 1894. As a left winger with the 1920's era Ottawa Senators, he topped the 20 goal plateau eight times. Joined by brother Corb, Cy won four Stanley Cups with the Senators before capping off his career with a fifth, in a Bruins uniform in 1929.

To the growing number of voices proclaiming Cornwall is Hockeyville, it can be added that Cornwall has in fact been Hockeyville going on a hundred years now.

For those who have seen the Cornwall Hockeyville clip, you'll notice that the last scene shows children in a grade 6 classroom shouting "Cornwall Is Hockeyville!" That class is from Immaculate Conception school, and the teacher, dressed as a referee is Joy Martel, who had a film crew come in and shoot the kids cheer.

My daughter Crystal, who is part of Mrs. Martel's class, was asked to help gather some hockey jerseys for the filming. She borrowed a few of mine including a Canadiens jersey she is wearing, and Detroit and San Jose duds that you might spot in the . I was lucky enough to get into class that morning and catch this little bit of fun with the digicam.

Cornwall also has it's share of very well known hockey fanatics. Witness the picture below of a gentleman with a collection of memorabilia so impressive, a former NHL'er stopped by to check it out.