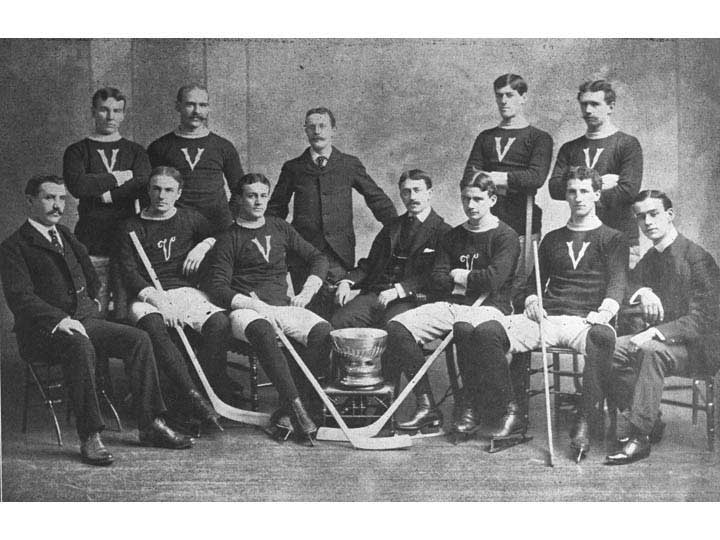 The Montreal Victorias went undefeated in AHA league in 1898 play to retain the Stanley Cup for another year. In the 8 games played, they scored a whopping 53 goals, which is likely what dissuaded any opponents challenges in this season.

The Victorias allowed 33 goals scored against, 12 more than the second place AAA.

The records of the other AHA teams for the season were:

Gordon Lewis played in three games for the Victorias, surrendering a respectable 9 goals.

Hartland MacDougall, a point man not usually noted for his goal scoring, notched 3 goals in the 8 league games played.

Mike Grant played in his fourth Stanley Cup in as many winters. Grant, who also captain the Montreal Shamrocks and Crystals, is widely regarded as the game's first rushing defenseman.

Graham Drinkwater, upon retirement, became a stockbroker in Montreal with the firm Oswald, Drinkwater, and Graham, a prosperous business which continued to flourish long after his death in 1946.

Cam Davidson led all AHA goal scorers with 14 in seven games. Clare McKerrow of the AAA was next with 13.

Bob MacDougall placed third in scoring with 12 goals in eight games. He was admired for his great speed and accurate shot.

Frank Richardson became the Victorias other goalie this season, appearing in five games and winning each one.

Spare Jack Ewing suited up for only one contest this season.

The Amateur Hockey Association disbanded prior to the start of the next season with the new Canadian Amateur Hockey League (CAHL) taking its place as the top hockey league the country. The five former AHA franchises would comprise the new league.