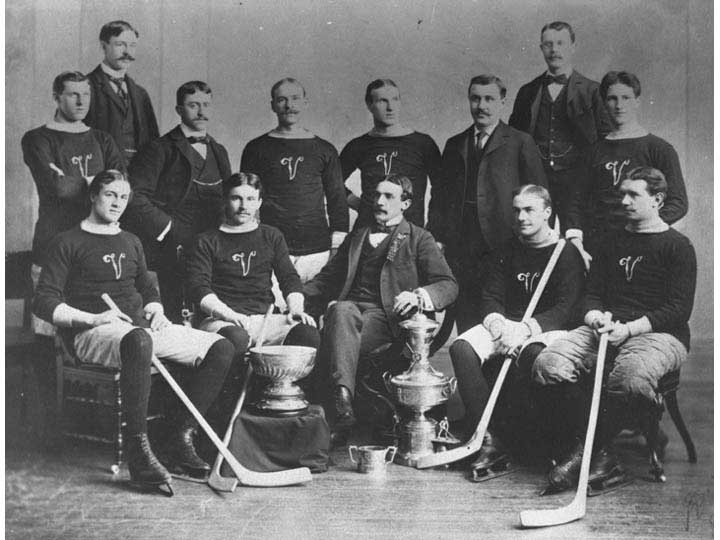 The Montreal Victorias made it three Stanley Cups in a row in 1897.

The three time AHA champions, accepted a challenge from the Ottawa Capitals, champions of the Central Canada Association, after finishing first in the AHA with an impressive 7-1 record.

Intended to be a best of three series, the idea was curtailed after the Vics lopsided 15 -2 win.

Following the Victorias in the AHA standings were the Ottawa Capitals (not the same as the challengers) witha 5-3 record, the Montreal AAA at 5-3 also, the Quebec Hockey Club at 2-6, and the Montreal Shamrocks with a 1-7 mark.

Goalie Gordon Lewis took over the duties from Robert Jones, played every minute of every game on the way to leading the Vics to a third straight league championship.

Point man Harold Henderson did not miss any games this season, his third Cup winning year with Victorias.

After retiring in 1902, Mike Grant turned to officiating, causing a stir in one series when he refereed wearing a derby hat.

Cam Davidson played all year with the Vics, league play and challenge Cup both.

Injuries limited Graham Drinkwater to four games of AHA play, but he was front and center in the challenge game in combination with Davidson and Bob MacDougall.

Bob MacDougall was one of many Montrealers who learned the game at the Lennoxvile school. He had been a halfback with the Montreal provincial championship team, but quit two years previous due to a shoulder injury.

After scoring 8 goals in as many games in AHA play, Ernie McLea found himself on the bench for the challenge. The Four year Vivs vet had also played with McGill while still in school.

Like Hartland MacDougall, Shirley Davidson played only in the lopsided challenge. He was a swift player noted for his ability to dodge. His father was the Honourable Mr. Justice Davidson.

Defenseman Hartland MacDougall was brought in as a ringer for the challenge game. A general utility man, he was a good skater who had played one season as a goalie before finding his calling as a defenseman.

Ewing, Molson, McLellan and David Gillelan were spares who saw limited action during the season.

The Victorias were well on their way to become hockey's first dynasties, as the coming years would prove.

Hockey in Montreal had been popular for quite some time, and their strong roots in the game were paying fruit.

Here is an article from the Montreal Gazette, dated March 4, 1875, that attests to the zeal Montrealers had for the game. The contest between two unnamed teams, took place at the Victoria Skating Rink, 49 Drummond St. 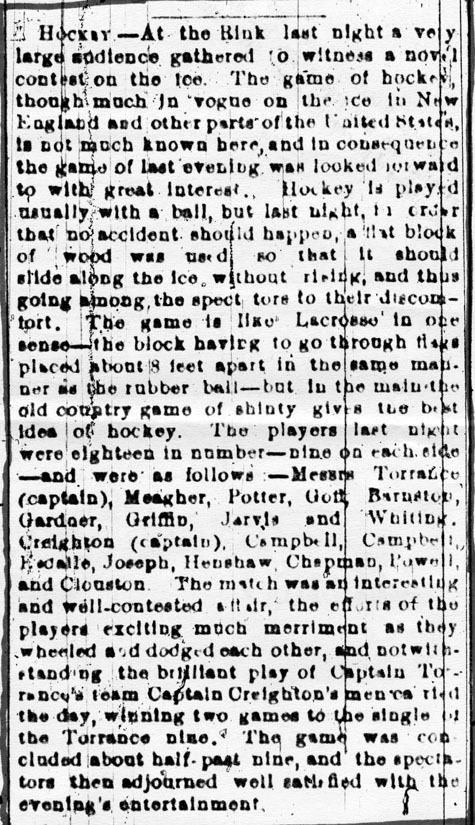