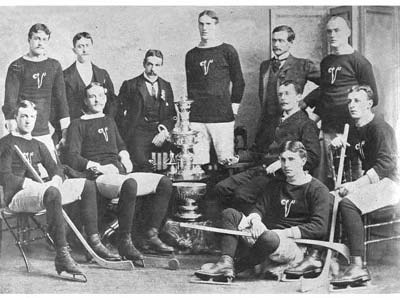 In the early days of the Stanley Cup's challenge years, the format was still in evolution. Several Cup challenges in those years were accepted, only to be nullified due to lack of ice. As competition for the Cup gained in popularity, the format was yet to be solidly defined. The Cup was competed for, in the Dominion Of Canada, as decribed by Lord Stanley of Preston, by amateur teams. Most so called "Amateur Teams" were seemingly very professional organizations, while a great many would-be challangers parlayed their prowess on outdoor rinks only.


As it will be seen, in coming years, what constituted a Cup challenge, became a grey area. The AHA league winners were presumed the initial Cup holders. The time frame for challenges were yet to be set out, and were quite often limited to the exclusivity of available ice. It seems, at times, that the Cup trustees made the rules as they went along.

The Montreal Victoria's won the Stanley Cup in 1895 based on a first place finish in AHA league play. However, Cup trustees John Sweetland and Philip Ross had already accepted a challenge from Queen's University in Kingston against the reigning Cup champions, the Montreal AAA.
They ruled that had the University beaten the AAA in a challenge, they would be declared Cup holders; if the AAA won, then the Victoria's, as league champions, would remain rightful Stanley Cup champions. The Victoria's clinched the league championship when they defeated the second place Ottawa Capitals 3-2 on the final day of the schedule. The AAA won its challenge because the officials ruled that three of Queen's goals were offside - the offside ruling in Quebec and Ontario at the time differed. Queen's also were troubled by the larger Montreal ice surface. The AAA won the March 9, 1895 contest 5-1.

The final standings in the AHA were as follows:

* A game between the Crystals and Quebec was voided after Quebec protested that the Crystals had used ineligible players. The Quebec club was suspended after players assaulted the officials.

Robert Jones was in net for 4 of the Vics games, allowing just 8 goals against.

Harold Henderson appeared in only 3 games without scoring a point.

Mike Grant, the team captain, was a champion speed skater.

Shirley Davidson scored the game-winner in the Vics 3-2 win over Ottawa. He was also captain and quarterback of the McGill football team.

Bob MacDougall scored ten goals in this season, second best on the team.

Norman Rankin was the teams leading goal scorer with 11 goals in 8 games.

Roland Elliot was a feared defender for the Vics, who allowed only 20 goals against in 8 games.

William Pullan, a defenseman, played only a single game for the Victoria's, and was not entirely considered a team member.

Hartland MacDougall was one of four goalies used by the Vics. He surrendered 9 goals in 2 games.

Jim Fenwick, another Vics goalie, let in two goals in his one appearance.

A. McDougall allowed only one goal in the game he played, a 5-1 win over Ottawa.

G. R. Hooper was an executive with William Dow & Co. in the city.

W. Jack was the team president.