Share All sharing options for: Stop Providing The Weary With Excuses - Lafleur 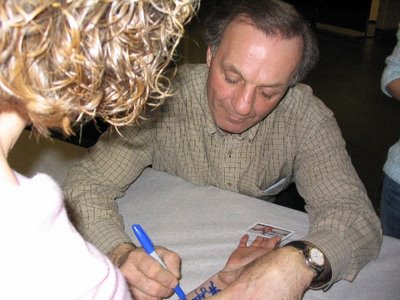 (Note - Guy Lafleur targets Kovalev and other lame duck players in his Sunday "Journal De Montreal" column. Lafleur's usual frankness is displayed here, as he doesn't mince words with what he sees as ailing the Habs current state of mind.The translation is mine. My apologies for finding no online link.)

As victims fall to fear factor, certain Canadiens players have not only lost their scoring touches, but are now also falling from combat, each after the other, claiming the most surprising and oddest of injuries as their escape.

Upper body, lower body, and every piece in between, with nothing left out. Our dearest Alex Kovalev, humbled by a recent benching, and feeling the heat of mounting criticism, has suddenly declared that an old elbow injury has made him unfit to play. Just when we needed this millionaire the most!

The coming weeks will determine whether the Canadiens make the post season, and further, how long they survive them. I believe that there are two or three player who really could care less...

When I heard of Kovalev invoking the elbow injury at this important time of the year, my arms simply fell from the wieght of disbelief. It's an injury that appears to me like an inability to face the music.

When I think that Kovalev's GM Bob Gainey once had both shoulders frozen during the playoffs in 1979 for the betterment of the teams chances, it is unequivocal that today's stars simply do not carry the same passion inside them. It's no wonder so many of the league's buildings are half empty. Witness New Jersey, who have a very good team, playing in front of empty seats! The is the future of this league, when players who are supposed to attract crowds fall from battle at the sight of the slightest little bobo.

Professional athletes don't have the right, in my eyes, to let their frustrations eat at them in this manner when teams need them most. It is inadmisible and insulting to fans of the game. If a player lacks the courage to face mounting challanges, prefering to watch from the sidelines, they should rightfully give it up and go home.

To think that team management, media, and fans, remain comfortable with formulating excuses for these weary types! They have no excuses, it is simply their inflated ego's taking command over their meager production and usefulness.

OUT WITH THE PRIMA DONNA'S

The Kovalev scenario depresses me to no end. The Canadiens don't need this type of character. It's better that the team fills roster spots with hungry prospects from the Hamilton Bulldogs. They surely couldn't do worse and the fresh start would be a welcome new beginning. It's high time to give these unproductive prima donna's the boot. Time to quit breast feeding them by means of handy excuses, sending them back out to the ice with soothers in their blowholes.

I'm not certain that the Canadiens can achieve the post season. One thing is for sure, the team will finish where it deserves to. I'm hoping it's not in tenth place. The number 10 is the number I proudly wore during my career. I don't want it tarnished by them finishing in that position.

Not knowing which way to turn to get out of the current state of mediocrity, the players recently held a post game team meeting in order to clear the air. A motivational reunion to recharge the troops, it was said. Now come on...meetings like this should occur between players on a daily basis, not simply when team reaches a desperation point. In my day players had dinner together before every game, where the comraderie of team mates was reinforced by being together as a group on a constant basis. That's a real team!

What we're seeing here are a bunch of individuals with only themselves in mind, who've decided it's time to butt heads.

These improvised reunions are nice fodder for the press corps, but they hardly create the necessary bonding the team requires to make things better. In any case, they have little effect on the team's biggest crybabies, those simply waiting for offers from greener pastures to get out of the heated kitchen.

I have news for such types. With each Canadiens loss, they lose credibility and interest in them wanes. Other general mangers aren't fools. They have little recourse for players who do not roll up their sleeves and go to work.

Witness the lack of interest for Sergei Samsonov once placed on waivers. No team even wanted him for free. It's not that different for other players lacking the fortitute to go to work. Their market value is in freefall mode. They are losing whatever repuatation they've been able to establish, or have lost what's left of it. The Canadiens wouldn't get anything of value in return for their services, even as I believe Gainey will be making moves by Febuary 27th.

Gainey will attempt to land a player or two that can breathe life into the teams slagging hopes. What would we be parting with to get anything decent in return? Trades are made to improve a team, a not done simply to exchange malfunctioning parts. Trades for tradings sake, is the meaderings of average teams with no eye to the future.

One of the problems with the Canadiens is the existance of team cliques. Craig Rivet is punished and all his buddies stop performing. The problem with these cliques has been a reality of this team for years now. They were silent in the fall when all was going well, but they have again surfaced as sides line up to play the blame game.

It's up to Canadiens management to sort out the rotten cores from the good apples, and send them packing off to other destinations. Bring in some players that are better team orientated that are proud enough to care about what quality of play they offer to fans that deserve much better than this charade.


Much thanks to Zanstorm at Waiting For Stanley for the photoshopped rendering of Kovalev and Samsonov. I knew it would come in handy sooner or later!