Share All sharing options for: Souray Looks To Stay 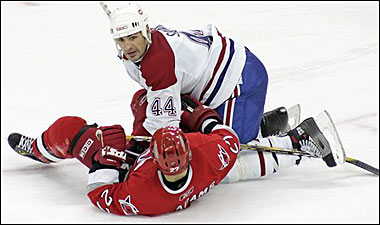 All-star defenceman Sheldon Souray has been given a vote of confidence by Canadiens management, Sportsnet has learned.

The team has no intention of shopping the soon-to-be unrestricted free agent going into the NHL trade deadline on Feb 27. With the impression Souray will now finish the year with the Canadiens, sources are telling Sportsnet the club will make every conceivable effort to ink Souray to a long-term deal.

Souray has vehemently denied that he has ever approached Habs GM Bob Gainey asking for a trade. Again, after yesterday's game, reports were surfacing once again that demands had been made on the part of the big defenseman. Souray is likely anxious to put the whole deal behing him.

While the behavior and actions of certain team mates such as Alexei Kovalev are questionable at best, Souray has stood up for the team. He is the first face present to media after each loss, underlining the positives he sees, and acting like a captain would in light of the mounting adversity on the Canadiens team. His leadership and performance have been one of the few bright spots on the team this season.