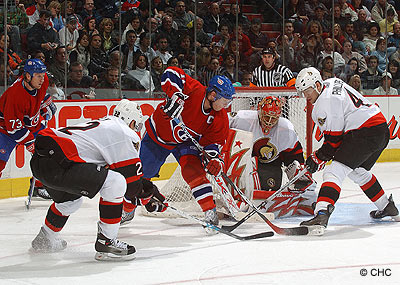 Some random notes in random order on tonight's Canadiens loss to Ottawa.

As things continue downhill for the Habs, I must admit to not being terribly fond of doing an in depth game analysis. Since my friends at Theory of Ice and Current Habs are doing such a bang up job, I choose not to be redundant, and would prefer to swing readers there on a continual basis. Add these blogs to your favorites list - it's well worth it. In fact Matt, at CHH was at the game, and was excited to learn that his favorite player, Steve Begin, was returning to the lineup. Hope he didn't wet himself when Begin's goal got the Canadiens going!

I for one, thought the Habs owned this game, having outshot the Senators 40-30. They outchanced Ottawa big time, and if it were not for the acrobatics of Ray Emery the Canadiens would have won the game. He was simply spectacular when he needed to be, while the Swiss cheese at the opposite end let the team down more than once with some soft goals getting by him.

And to think, I was finally just starting to like Aebischer!

Why he comes out way too far to cut down a two on one is beyond me. Especially when the D plays the shooter, in reference to the Spezza gift.

Alex Kovalev and Janne Niinimaa got doghoused and earned it. RDS is saying that Kovalev smashed sticks in the dressing room after the game. I hope they were his own.

Begin and Komisarek were sparkplugs tonight.

Chris Higgins cannot buy a goal despite his efforts. He was one of the better Habs tonight,but came up empty.
Ray Emery will have two highlight reel saves to brag about, in addition to the paddle slap to the face he gave Lapierre. He robbed Francis Bouillon on a fluttering knuckleball shot close in and stoned more than one Hab in similar fashion.

His unglued moment had something to do, I am sure, with his not being selected one of the 3 stars of the game.

For those who missed it, Emery struck Lapierre in the face with his stick after the Canadiens forward crept in for a possible rebound. Nothing Lapierre did warranted the action. Emery was given a 2 minute penalty, as Lapierre was not cut. It clearly deserved a 5 for attempt to injure. Sens commentator, and former goalie Greg Millen, agreed the call was not dealt with properly. The Canadiens will be sending the film clip to the league in protest.

NIce hit by Komisarek on Chris Neil to open the game. These two are developing a history with a promising future. The antics that went on between both from opposite penalty boxes were quite humourous. Seeing the goings on, one just knew they would tangle before the game was over - and surely they did.

Coach Guy Carbonneau was upset that Neil did not receive an instigator call on the tilt. The camera zoomed into the Habs bench and showed an animated and gesturing Carbonneau unhappy with the call.

I was slightly caught off guard by what happened next.

Was it a flipped bird that quickly turned into a two digit peace sign?

Does Carbonneau have a tendonitis-like delay in his index finger?

I for one, thought I was seeing things, and shook it off as old age eyesight until it was offhandedly mentioned later in the broadcast. RDS commentator Yvon Pedneault told of hundreds of calls coming into the station regarding complaining of what it appeared to be, as they showed a slomo version that had the one finger morphing, it seemed, into two. Oddest of all, the two finger holdup came from the back of Carbonneau's hand rather than the palm. Pedneault actually attempted to purvey a reading of the coaches lips to explain that he was in fact complaining about a 2 minute penalty not being called.

It'll be curious to see if a big deal is made of this.

As an aside to this incident, Carbonneau was traded away from the Canadiens in 1994 after Le Journal De Montreal ran a picture of Carbonneau flipping a bird at reporters from a golf course shortly after the Canadiens elimination by the Rangers. Habs management didn't take kindly to the press the story received, regardless of intent.

I will try to YouTube the clip in the coming days to add it here if I can - no luck so far!