Share All sharing options for: Rating The Trade Deadline Deals 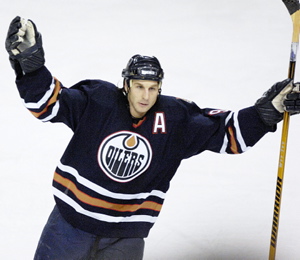 Here's a breakdown of the deadline deals from today and my take on each. Most of the 25 trades made were frivolous in nature. Other than the "why even bother" variety, I estimate that possibly only 5 of these deals might impact a Cup champion. Half of the 44 names included are unknown quantities. Several of the draft choices traded are so far back in the rounds they will be inconsequential, with an odd exception. First round picks are the prized wild cards of these deals. In roughly 100 days, many of the GM's who pulled off these deals will likely wonder why they got caught in the frenzy.

May is a decent checking winger, Wall brings depth in goal for a team who badly needs it.

Krog can light it up at the AHL level, it cost the Thrashers nothing to bring him back.

Biron could have fetched a better return earlier. Why the Sabres even bothered with this one baffles me. Was it cost related? A Cup contender now has no backup goaltending. A brain scratcher for sure!

Zubrus will fit in nicely with the Sabres style up front. Novotny had some upside for the Caps.

A depth defenseman for the Sabres fearing a repeat of last seasons injuries pilaging their D.

Good depth pick up for the Flames.

Parker should put the Avs over the top...Oh nevermind! A pointless deal.

Perfectly replaces the uselessness of Conklin.

A chemistry killer. The thought of this thug hoisting a mug in this sacred jersey makes me want to retch. For one post season anyway, I'll be cheering against the Wings for this one.

The biggest deal of the day! While the hallucinogenic Isles will be dreaming of a fifth Stanley with this one, Kevin Lowe has fleeced Garth Snow big time.

Norstrom makes the Stars a contender of sorts. All the bit pieces of this deal are dust in the wind other than the Kings getting a first round pick.

A slight upgrade for the Bruins, Mara moves closer to the journeyman tag without much resume

Leighton could be the next "Red Light Racicot!" A pickup for the Hamilton Bulldogs only.

Moore, as a Ranger, was a Habs killer. Too bad the teams won't meet for another three years.

With the Sens farm system virtually depleted, why deal a 2nd rd pick for a 4th round has-been?

The Thrashers will never replace Hamel!

Roberts is used down to the bones. He'll be long gone once the Penguins win a Cup. Welch will become a top 4 D-man one day. An odd move at the price.

Sidney's new bodyguard isn't as eager to drop them as he once was. Has 2 years remaining on current deal. A smart move with little risk.

Helps the Penguins depth at the position.

Replenishes losses from recent trades, nothing else.

A big move! Combined with the aquisition of Rivet days earlier, Guerin adds veteran presence to the Sharks hopes. Might be one of the deals that actually turns into something.

Ward is better than average PK man, a Lightening liability.

More promise on the the Chicago side of this one.

Unknown quanity for unknown quantity. Somebody knows who these guys are!

A smart move by GM Ferguson should the Leafs make the playoffs. Bell is easily surrendered and replacable.