One Hand On My 'Ockey

Share All sharing options for: One Hand On My 'Ockey 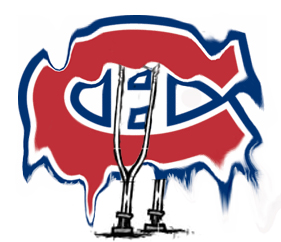 Caught between trying to explain the Canadiens loss to the Hurricanes tonight, and wanting to write a hockey-love poem to pacify E at Theory Of Ice's angst at the Habs standings nosedive, I ended up in a state of compromised ideals.

While yesterday, there seemed to be hope, each mounting loss feels like nails in the coffin.

Six damned losses, four games in which I felt the team played well enough to win. If anything, I have learned that effort minus discipline equals nothing.

There are merely 20 games of the season remaining. With 95 points being almost a bare minimum for playoff achievement, the Canadiens need at least 14 wins to qualify for what would seem like a fruitless post season.
I wonder if it is worth it.

I question whether GM Gainey shouldn't tear this squad apart and become a seller, big time, as the trade deadline nears.

Other than a 5 game win streak in mid-December, this bunch of incompatible personages has hardly resembled a championship team.

I really can't add much to what has already been touched on in autopsies of the team. My ass crack is parked firmly on the fense in regards to half of the teams composition.

My guess is that come Febuary 27, Bob Gainey will have 6 cellphones in his hand, planning for next year.
My eulogy, my epitaph for the 2006-07 edition of these Montreal Canadiens, reads like a broken hearted diary of promises gone wrong.

I took a spin in the car after the game, to calm my disapointment, with the radio loud to distorting. As Queen's "We Are The Champions" faded into Alanis Morrisette's "One Hand In My Pocket", I sang Habs mocking lyrics all the way home.

I wasn't soothed by my cynicism.

One Hand On My 'Ockey"