My Gift, My Girl

Share All sharing options for: My Gift, My Girl

On a not so hockey related note, this blogger had one great day!

A best ever kind!

If you have children, remember being one, or still are one at heart, you'll feel what I'm going to go on about.

I have a 12 year old daughter, who has played hockey for 7 seven years now. In this site, I refer to her as Poke Check. She's a heckuva girl. Make that heavenly!

My kid has an unparalleled zest for life. It may have started when I got her involved with sports and hockey, but who really knows? Having coached minor boys for a decade, I can testify to sports being a great social launchpad to an enlightened life and perspective.

Way before my daughter held herself upright on skates, shoving a chair the rinks length to stand up, she was uniquely special and smart.

At 10 months old, she knew 33 words, many from asking her favorite saying at the time, "What's that?"

Her Mom and I were so freaked, we wrote each word down as it became part of her diction. At that time, being new parents, we thought it cute, as well as amazing.

As with any newborn baby, especially a first, a parent experiences adventure throught a child's eyes. It is a revealing perspective, to put yourself in their shoes.

The curious newborn grew, skipping ahead five years, to a day when she began asking about Dad's proudly hung pictures on the wall.

A decade of hockey teams I'd coached, while one day envisioning a son I'd send out to pop in a game winning goal.

My kid's curiosity about the pictures, and games watched on TV, led her to question me more and more.

One day, when she was five, I handed her a sawed-off hockey stick and walked out to the road for some fun and games. I told her to stand so many feet away from me so I could roll a ball to her. We did this for a minute, she mimicked my motions quickly enough, putting passes right on the tape.

While putting her to sleep that night, she brought up the fun we'd had in the road once more. When I asked her if she'd like to learn to play the game, on skates, she lit up. Her first day in hockey came one week after her first day of school.

She has always been that way, always wanting to acheive.

After a week of being in pre-kindergarten she announced she wanted to become a schoolteacher one day. In 8 years she had never deviated from this goal. I'm 44 and still don't know what I want to do some days.

Over the years, we've been told what great parents we must be and we just laugh. This kid is of her own creation, it seems.

As the years passed and my daughter grew, she took to joining every possible school activity from talent shows to reading clubs. She signs up for every sporting event the schools offer. She's in the choir with her little sister, working with the newspaper club, voluntarily tutors anyone who needs help with homework, she's designed a yearbook cover, received the Catholic Life Achievement Award, monitors the schoolyard for bullies and accidents, helps the teachers with their work, participated in the Cops and Rockers program raisng money to help build a youth center, and keeps high acedemic standards - A's in everthing!

She's done all this without arousing jealousy and envy among her peers.

She's everybody's friend at the school. There are lots of kids with issues in a grade school. Kids with anger management problems, boys and girls whose moms and dads are separated or divorcing, and kids with learning disabilities or handicaps. She treats them all with respect and befriends them all. Kids who are having trouble with other kids or teachers, go to her to talk things out. She does her best to help them and often asks me for advice when their problems really bother her.

A teacher she will one day surely be - I've no doubt. She already teaches me in many ways.

This past week, my wife received a phone call from the school principal informing us that we needed to be at the school gym Tuesday morning for a very special assembly. We were instructed not to breathe a word, as only the principal and the teacher knew what was happening.

A teacher who is very fond of her, entered her into a contest at the local radio station called "Kids With Class" and my daughter won. This contest, that I knew little of, is apparently a big deal in the city - hundreds of entries are recieved monthly. When the person who chooses the winners read the letter my daughters teacher submitted, she was very touched. 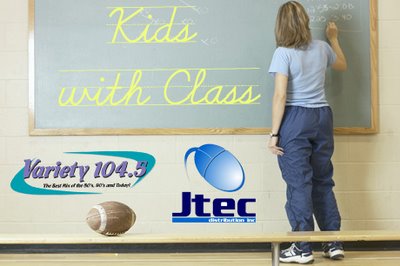 Along with my wife and I, both grandmothers also wanted to be in that gym for that assembly. We had to figure out a way to sneak us about the school hallways and not be seen. It was no easy chore, as most of my daughters classmates know me from when I pick her up in schoolyard. Along with our family members, the school also had to hide the radio station representative, photographers from both local papers, the sponsors of the contest, and the school board trustees.

That morning I appreared in my daughters class. The teacher, an incredible and positively fun woman, had gathered a film crew to shoot a segment on the students for "Hockeyville". She dressed as a referee, and had some special guests to help round things out. I went there under the pretense of filming the event for the blogsite and handing out a half dozen of our hockey jerseys. That gave me an excuse to be in the school a little bit later for the assembly without giving anything away.

She had to settle for wearing her second choice, an old Habs jersey of mine, Kirk Muller's number on the back, as she lent her friend her favorite team jersey - the Senators. I would be going back to the school to cull them later.

I would be able to film the assembly without my daughter suspecting that I was there for another reason. 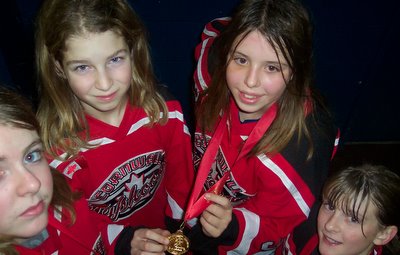 Poke Check, this game MVP, is 3rd from the left, with the rosy cheeks.

When the assembly began, the representatives from the radio station and the sponsor quickly explained what their presence was about and all the kids excitedly cheered.

My daughter was sitting far off to the other side and I needed all the zoom the camera had just to focus in on her. I shook so much with nervousness for her, it rendered the clip useless.

As the sponsor began reading the teachers submitted letter, the students began looking around at themselves. As each trait described in the letter identified the student, minus gender, kids began whispering to each other that it was my daughter who'd been chosen.

I could see her looking around frantically as her name was being spoken by the kids. The sponsor then mentioned a hockey player, and then a knitter, and then narrowed it down further, using "she's" and "her's". My daughter was totally freaking, but trying not to act like it was her. All the kids knew, while she still had some doubt.

"Maybe there was another female knitter that played hockey, I don't know everybody!", she told me afterwards.

While looking around, she finally caught site of me with the cam, my wife, and our two Moms.

They announced her name and called her up to the front of the gym. She appeared as though she had no idea what was going on.

She was handed a $100 worth of prizes, including the MP3 player she so desperately wanted.

My daughter was nervous, stunned and teary, as at least 50 students surrounded her to congratualte her.
They looked at the her prizes, admired the certificate she's gotten, and shared in her overwhelming moment.

The gathered media then asked for family members to come to the front for pictures, posing with all involved.
My wife had bought our girl a rose and handed it to her. I handed one to our youngest daughter, seated near the front - I didn't want her feeling left out, or any less special.

After all the snapping away had ended, and everyone wandered away, I got engaged in a short conversation with a young little boy. I looked around to see the remaining entirety of the school populace staring straight at me.

I'd been left alone up there, and they were all looking at me as though I was there to say something. I quickly ad-libbed a thank you that included all my daughter's teachers over the years, the aides, the principal, and the kids themselves.

I mentioned that my daughter loved coming to school every single day because she's amongst such great friends. I told them that she spoke about so many of them on a daily basis. Noticing that I was holding her award paper in my shaking hands, I told the kids that this achievement of her's was owed to the friendships the kids felt towards each other, and that the their "class" helped make the positive environment all possible.

Where exactly all those words came to me from, I still don't know!

As I encouraged the kids to applaud themselves, I made a hasty getaway to find my girl quivering and crying joyously in the hallway. Everybody that walked past her gave her a pat.

I've a great many role models in my life - none greater than this 12 year old gift.

To visit the Kids With Class link and see what her teacher had to say, click here.