The Hockey Sweater by Roch Carrier

Share All sharing options for: The Hockey Sweater by Roch Carrier 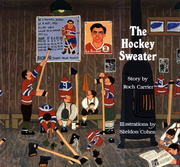 (Note - this post is dedicated to the newer Habs fans such as E at Theory of Ice and Matt at Current Habs history.)

Though a relatively recent story, "The Hockey Sweater" has become one of the best-known works of literature in Canada. It was made into a National Film Board of Canada (NFB) animated short in 1980, known as The Sweater, or Le Chandail. The short is often shown, in both French and English, to elementary school students, making it very well known amongst Canadian youth.

The story is widely considered an allegory for the linguistic and cultural tensions between anglophone and francophone Canadians, and an essential classic of Canadian literature. An excerpt from the story is now also commemorated in both official languages of Canada on the back of the Canadian five dollar bill.

Hockey Sweater" is based on the real experience of Carrier growing up in an isolated part of Quebec in the 1940's He, like all boys his age, was a big fan of the Montreal Canadiens and their star player, Maurice "The Rocket" Richard.

When Carrier's Montreal Canadiens hockey sweater wears out, his mother writes to the eaton's catalogue company to order a new one. Unfortunately, Habs jerseys are sold out, and the company instead sends a Toronto Maple Leafs sweater, the Canadiens' bitter arch rivals.

Roch Carrier in his Eaton's sent Leafs jersey. Notice all his friends!
A loyal fan of Les Habitants, Carrier protests having to wear the new sweater. But his mother refuses to let her son wear the old worn out sweater and, apparently unaware of the business's traditional policy they advertised, "Goods satisfactory, or money refunded", insists that if they were to return the sweater it may offend Mr. Eaton, himself a Leafs fan. As a result, young Carrier is forced to wear the Leafs sweater to his hockey game, feeling humiliated before the other players on the ice, each proudly wearing Canadiens sweaters.
Julian sent a link for a West Coast variation on the short added here - a must see for Canucks fans!