Share All sharing options for: Habs Send Rivet To Sharks For Josh Gorges And First-Rounder In 2007 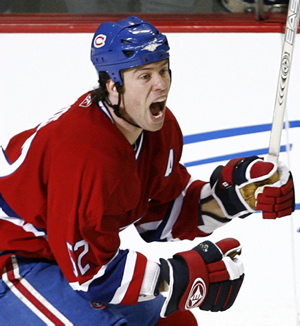 Gorges, 22, is currently playing in his second season in the National Hockey League. This season with the Sharks, he played in 47 games, registered four points (1 goal, 3 assists) and 26 penalty minutes. He averages 17:47 minutes of ice time per game. In 96 career regular season games, the 6’1’’, 195-pound defenseman registered 10 points (1 goal, 9 assists) and 57 penalty minutes.

In his rookie season in 2005-06, he played in all 11 playoff games with the Sharks and collected one assist.Gorges, a native of Kelowna, British Columbia, joined the Sharks as a free agent on September 20, 2002. In his first season as a professional with Cleveland in the AHL in 2004-05, he was named the Barons’ Rookie of the Year.

Gorges played his junior hockey in Kelowna in the WHL, from 2000 to 2004. He totaled 152 career points in 245 regular season games with the Rocket (33 goals, 119 assists). As team captain, he led Kelowna to the Memorial Cup Championship in 2004, receiving the George Parsons Trophy (Tournament Most Sportsmanlike Player). He helped Team Canada capture the silver medal at the 2004 World Junior Championship. He was also named to WHL All-Star Teams twice (2004 and 2003).

Josh Gorges was born August 14, 1984 in Kelowna, British Columbia. A free-agent signing of the San Jose Sharks in the summer of 2002, Gorges is a graduate of the WHL's Kelowna Rockets.

A steady defenseman who can contribute offensively, Gorges spent four seasons in Kelowna, helping the club capture the 2004 Memorial Cup. In his four seasons with the club, Gorges registered 152 points (33-119-152) before going on to make his professional debut with the AHL's Cleveland Barons in the fall of 2004. In his final two seasons with Kelowna, Gorges playoff totals are 36-5-30-35.

A member of Canada's silver medal winning World Junior team in 2004, Gorges went on to make his NHL debut with San Jose during the 2005-06 season while seeing limited action with the clubs AHL affiliate.

Eric Duhatschek in The Globe and Mail writes that "faced with the prospect of losing him anyway as an unrestricted free agent, the Montreal Canadiens traded defenceman Craig Rivet to the San Jose Sharks in exchange for defenceman Josh Gorges and a 2007 first-round draft choice. The Canadiens also surrender a fifth-rounder in 2008 in the deal."

I see this move as GM Bob Gainey making the statement that he will focus on resigning Sheldon Souray and Andrei Markov come July 1, 2007. The Habs GM essentially took care of the least of his priorities and freed up a couple of million in the process. Rivet has long been rumoured to be part of a divisive dressing room clique and his benching for a game back in january clearly spelled the beginning of the end for the longest tenured Canadien.