GM Gainey Will Be Defined By Trade Deadline Actions

Share All sharing options for: GM Gainey Will Be Defined By Trade Deadline Actions 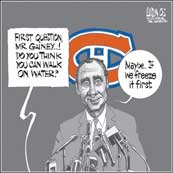 The city of Montreal's media are an ocean divided when it comes to how Candiens GM Bob Gainey should approach the Febuary 27 trade deadline. Fans fall on both sides of the divide are split as well.

While the Habs hopes were seemingly fleeting, questions arose as to whether they would be buyers or sellers within the coming week's wheeling and dealing.

After back to back wins moved them higher north in the standings, some are still calling for moves to be made.

It will all depend on how Gainey assesses the teams assets, progression and future.

Are the 2006-07 Montreal Canadiens the team that held on steadfastly to the fourth position in the Northwest division until a ten days ago, despite a recent slump?

Or are they the dysfunctional crew that has displayed a total lack of unit cohesiveness beginning with a December 23rd undoing at the hands of the Boston Bruins?

At Christmastime, you may recall, the Habs were one of the NHL's surprise teams. With Cristobal Huet proving critics wrong in terms of him being a one year wonder, the Canadiens power play and penalty killing units were, for a short spell, both ranked at number one in the league.

Since then, the Habs have meandered beyond recognition. Talents have come up lame, team togetherness has been nil to inexistant, and discipline at crucial times in games has been preached to deaf ears.

Injuries and viruses notwithstanding, getting a grip on the character of this team is no easy feat. It could be that the SOS launched to American League standout Jaroslav Halak came just in the nick of time to save the sinking ship.

Gainey and his scouting staff will have to make some crystal ball evaluations on the teams impending free agents as well as a crop of six or so young prospects on the verge of making the team.

The trio of defenseman set to become free agent come July 1st, Sheldon Souray, Andrei Markov, and Craig Rivet, are the teams main focus. Both Souray and the Canadiens have made statements that both want the relationship to last longer. Markov is harder to put a finger on. He would undoubtably a fetch a more lucrative offer elsewhere, but on the other hand he could also command some nicetradebait as well. Rivet may be sacrificed for no other reason than changing the guard.

Scrutiny of Gainey will be higher this time around as many of his past deals have been termed busts. Whatever love the Montreal populace has had with Alex Kovalev has worn thin. The Sergei Samsonov signing has been an utter disaster from the get-go. Bringing in Janne Niinimaa for Mike Ribeiro has had little impact. The Stars center produces at a good rate for his newer team while most nights Niinimaa is a healthy scratch. Radek Bonk and Cristobal Huet, coming over two seasons ago for Mathieu Garon was deemed a success due to the surprise that has been the goaltender's play. While no one misses Jan Bulis or Richard Zednik terribly, Mike Johnson has been a dependable pickup.

Gainey's biggest move so far has been one of dispatching the overpaid Jose Theodore for David Aebischer. It could be said that the current Canadiens goalie has been only slightly more reliable than the former, at a discount of $4 million.

There will be watchful eyes on Gainey in the next 6 days. The patient GM will likely speak of deals unmade when it's over, preaching to team confidence rather than risk a bad deal with a gun to his head.

Several players on this years team will not return next season. Ninimaa, Bonk, Aebischer, and Samsonov are all candidates to hit the highway. With the salary cap set to rise by $4 million, Gainey will be focused on signing the players he wants to return with, more than rental players who could likely change the teams fortunes at this point.

Expecting a rabbit from a hat via Gainey at this time, may be a little much. The stoic GM will surely catch hell from the media, whichever way he turns.