Share All sharing options for: Halak Mask An Inspiration 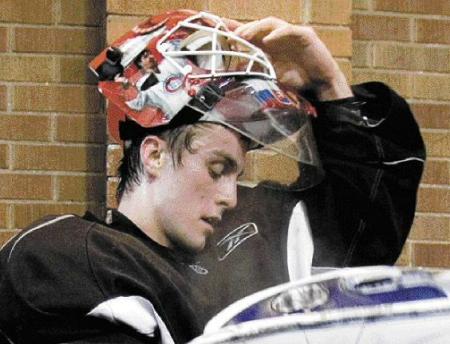 If frustrated Canadiens fans are searching for a sign that salvation is at hand, they might not have to look much further than the right side of Jaroslav Halak's goalie mask.

There, in living colour, is a picture of Halak's boyhood idol, Patrick Roy, in a Canadiens uniform and hoisting the Stanley Cup.

The symbolism isn't lost on longtime fans, who recall Roy led the Canadiens to a Stanley Cup in 1986, when he was a 20-year-old rookie.

Nobody is mentioning the 21-year-old Halak and the Stanley Cup in the same breath, but the Canadiens are hoping Halak, who was called up from Hamilton Thursday to replace the injured Cristobal Huet.

"We didn't bring him here to be a tourist," coach Guy Carbonneau said yesterday, after Halak participated in his first workout with the Canadiens. "(Huet) is going to be out for more than a couple of days and Halak will play."