Peter Forberg is headed of to Nashville, without his much needed foolproof right skate boot, but clutching a lyric sheet for "Thank God I'm A Country Boy" firmly in hand.

For Forsberg, the Flyers aquire F Scottie Upshall, D Ryan Parent, a first and third round pick in the 2007 draft.

Talk about rolling the dice on a deal.

For the Predators, it's all about winning Stanley and nothing else - as it should be. Gambling on a high risk player such as Forsberg with his chronic foot ailments could work wonders for Nashville, who were considered a Stanley Cup favorite even before pulling the trigger on the deal. Their risk is somewhat minimal in that their worst case scenario is that they don't win it all, they do not gain credibility so desperately needed in a city that seems to be indifferent to their success, and the four assets traded become key members of the Flyers. 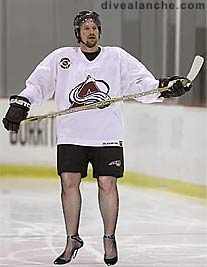 The Predators could look foolish should Forsberg resign with the Flyers in July - a scenario that has been mentioned by both the team and Forsberg. They could also be hearing "I told you so's" and "should have known better's" should the the injury prone Forsbrg crap out.

It could be hefty price for a rental player, especially if it doesn't cash out.

The Flyers meanwhile, took the best deal on the table. Ryan Parent and Scottie Upshall are decent young players with an interesting upside. They should be able to make more of a contribution to success in Philly than they have with the Predators. The late first round pick received is almost inconsequencial. Should they resign Forsberg, the Flyers come out looking very smart. Not getting a solid sure fire NHL'er in the trade is about the only knock on them. A top six forward in return might have been better than a first round pick.

Predators GM David Poile, who was once described by a colleague as "a sheep in sheep's clothing" had this to say about the Predators big gamble for elite team status.

Bob McKenzie, who was all over the deal up until it happened, weighs in with his usual insight.
Considering what was given up, I think the Montreal Canadiens could have easily bested this deal. They likely didn't, seeing as their first round pick for next season could well turn out to be Angelo Esposito, currently rated 10th in prospects. If the Habs continue to drop in the standings, atop pick could be a consolation.
I'm actually surprised that the Flyers weren't more patient in upping the selling price. Perhaps they chose not to wait due to Forsberg's injury status.