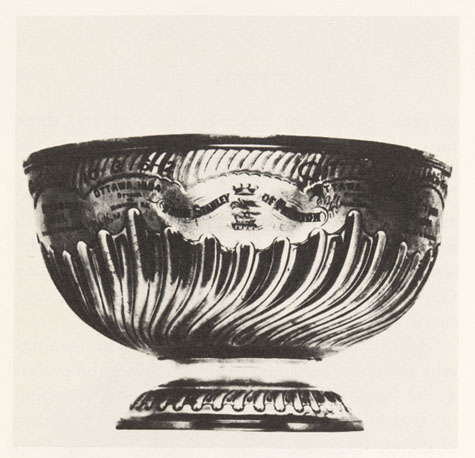 The Montreal AAA were awarded the first Stanley Cup even though the Montreal Hockey Club, which had recently become affiliated with the AAA, formed the basis of the team. The MHC, in fact, first refused the awarding of the Cup unless it was the acknowledged winner, but the players were later placated by gifts, most notably rings (engraved MHC), recognizing their achievement. The Montreal AAA's motto was "Jungor Ut Implear" - "I am joined in the club in order that I may compete." today, the Peel St. club has a thriving membership of 2,400 and is one of the more popular centers for exercise and entertainment in the city.

The AAA were awarded the Cup based on a first place finish of an 8 game schedule. Their record was 7-1 and they competed with the Ottawa Generals (6-2), the Montreal Crystals (3-5), the Quebec Hockey Club (2-5-1) and the Montreal Victorias (1-6-1) of the AHA.

The final game was played February 18, at the Victoria Skating Rink in Ottawa.

Once the AAA had been declared the official holders of the Stanley Cup, under the rules laid out by Lord Stanley, any Canadian hockey team could challenge for the trophy, but no team dared. 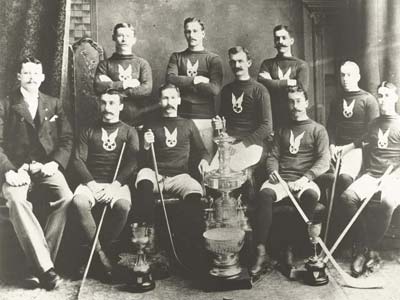 Paton led all goalie with a 2.30 GAA, allowing but 18 goals in 8 games. By day, Paton was a manufacturer's agent and by night he was active in the MAAA. He was credited with introducing quoits (a sport resembling horseshoes) to the club.

Stewart played point, similar to modern defense. He scored no goals in 7 games.

Cover point Allan Cameron was a tea and butter merchant for the makers of "Lieblings liquid extract and tonic invigorator."

Haviland Routh led the league in goals with 12 in just 7 games. Hodgson had eight goals in six games. 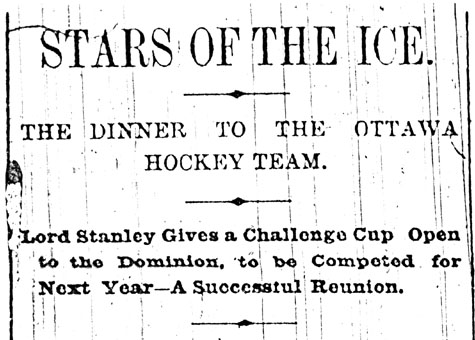 Billy Barlow was outstanding in the AAA's late season victory over Ottawa to secure first place and the Cup.

Alex Kingam was a book keeper, a seldom used sub at forward.

George Low, a bank teller, and Alex Irving, also a book keeper, were substitute forwards for the club.

The annual meeting of the Montreal Amateur Athletic association took place last night. It was and encouraging sign of the times to see how enthusiastic were all those who attended, and how thoroughly they approved of the work done by the directors in the past year. 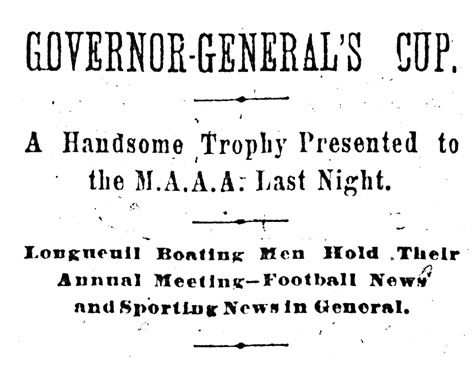 A preliminary board meeting was held at 8 o'clock, and an hour later the big room gradually filled. Then Mr. W. L. Maltby led a handsome looking elderly gentleman to the platform, accompanied by a mahogany box.

The gentleman proved to be Sheriff Sweetland, of Ottawa and the box contained the Governor-General's hockey trophy. President J. A. Taylor took the chair, and on the platform were Messrs. W. L. Maltby, Ed. Sheppard, J. G. Ross, F. C. A. McIndoe and W. S. Weldon.

The opening business was the introduction of Mr. Sweetland to the meeting as the representative of the Earl of Derby.

Mr. Sweetland said it gave him the greatest pleasure to meet the members of the M.A.A.A. for the first time.

He quite understood the courtesy of the president in suspending the regular order of business, and he did not want to trespass on their time. He would simply remark that His Excellency took great interest in hockey and had frequently made known his intention of giving a trophy. 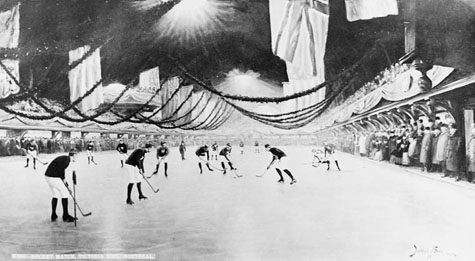 The only conditions attached to the cup would be submitted officially at the annual meeting of the Hockey association, and it was expected that the conditions would be agreeable to all clubs concerned. The last season, however, the Governor-General thought that the Montreal was justly entitled to the championship trophy. For many years the athletes of Montreal and Ottawa had had the pleasure of meeting each other. And the Ottawa people were always satisfied that they had always received fair play.

Hockey game at the Victoria Skating Rink in Montreal in 1893. Teams not known.

Of course Mr. Sweetland would much sooner see the cup in Ottawa, but after the Capital he preferred to see Montreal hold it. The only thing he was not certain about was how the Montreal people managed to win all the decisive games. He then presented the cup formally to Mr. Taylor, as president of the association. Mr. Taylor then accepted the cup in a brief but very appropriate speech. After a couple more congratulatory speeches the audience wanted to know if there was anything the matter with Mr. Sweetland, and finding out to their own satisfaction that there was not, the regular business of the meeting was proceeded with.

When the minutes had been adopted the report of the secretary was read. It was a little long, but most satisfactory. The treasurer's statement, which has already been published in the GAZETTE, was also confirmed.

Then came the presentation of souvenir rings to the members of the Montreal Hockey team, who have held the championship for seven years in succession. The lucky names on the list were: Messrs. Lowe, Barlow, Routh, Paton, Stewart, Hodgson, Cameron, Kingan and Irvine.