Douglas Orr, Father of Bobby, Passes Away at 82

Share All sharing options for: Douglas Orr, Father of Bobby, Passes Away at 82

Douglas Orr, the father of hockey great Bobby Orr, has died. He was 82.

His daughter Patricia confirmed his death to the Canadian Press on Saturday, but would not offer any further details.

"This has been a tough day for me," said Don Cherry, his usually boisterous personality dulled by the news of the death of a close friend. "He had a great hockey career at one time, but gave it up to go in the Second World War as a sailor. He was a great guy."

Douglas Orr excelled in track at Parry Sound High School and also in hockey, earning a long look from the Boston Bruins.

He declined an offer from the Bruins to play minor league hockey in the U.S., however, and enlisted in the Canadian navy.

Following the war, he settled back in Parry Sound with his wife Arva. The two had five children, Pat, Ron, Bobby, Penny and Doug Jr.

Orr and wife Arva welcomed their third of five children, Robert Gordon Orr, on March 20, 1948, in Parry Sound, Ont.Orr, who worked in a munitions factory after the war, encouraged sons Ron, Douglas Jr. and Bobby as they each played several sports. 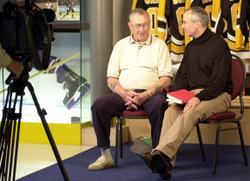 Four years later, he was the Calder Trophy winner with the Bruins, the beginning of one of hockey's most sensational careers.

Orr revolutionized the position with his end-to-end rushes into the offensize zone and passing ability, while utilizing his tremendous speed to get back to his own end.

He won the Norris Trophy as the league's best defenceman seven times and became the first at the position to lead the league in scoring, in 1970.

He helped guide the Bruins to two Stanley Cups but was forced to retire at the age of 31 during the 1978-79 season. He was inducted into the Hockey Hall of Fame immediately.

In 2000, Arva Orr died at the age of 78 after a lengthy battle with cancer. The couple had been married 53 years at the time of her death.

"It's exciting," Doug Orr said of the new facility.

"I'm sure Bobby will be very proud of this. I sure am."

Mr. Orr was closely involved in the community working alongside the Junior ‘A’ hockey team the Seguin Bruins, the Bobby Orr Hall of Fame, the Royal Canadian Legion Branch 117 and many other organizations.

Details have not yet been released as to when or where the funeral will be held, however a spokesperson for Logan’s Funeral Home said the funeral for Mr. Orr will most likely be held in the middle of the week.