For a die-hard hockey fan who is not a Maple Leafs fan, I must say that I was more than impressed with tonight's ceremony honouring the greats of the legendary '67 team.

It was well done, tasteful, and to the point. Without being pompous, the ceremony was touching and honest. Watching it, you would hardly know that the team had not achieved the same goal in the last 40 years. 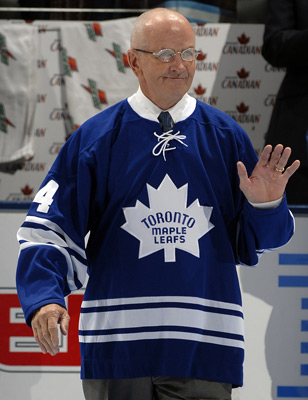 The team that was once referred to as the "Over The Hill Gang" seemed genuinely pleased to be in each other's company at center ice.

Johnny Bower is 82 and Dave Keon is 66. In both their eyes I saw something that told me that they had been waiting a long time for a moment such as this. I was happy for them, and happy for the Leaf Nation multitudes that shared in it. The loyalty of the teams supporters need nights such as these to reaffirm their belief in the team doing things properly. Tonight was a great first step. 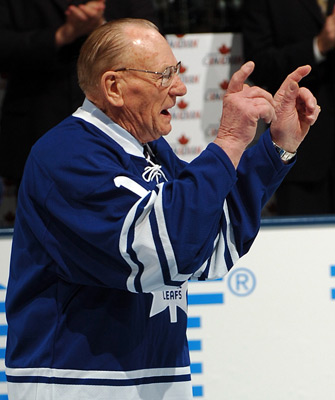 Watching the heroes of '67 walk out on the carpet tonight brought back to mind a post I read by Wardo at Leaf Club months ago.Wardo is an absolutely perceptive and knowledgeable writer, and can nail an an emotion or a subject with insight few others can match. He blogs rarely, which is a bit of a shame for readers. Surely it translates into him hopefully being a busier life form away from the keyboard. 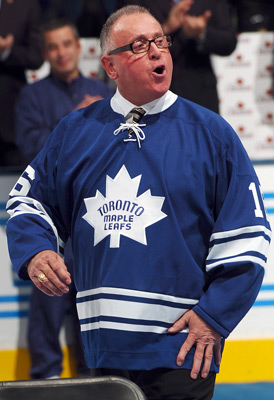 His post entitled "Retiring Numbers" was a pointed and concise debate on whether numbers should be retired or honoured in the Leafs fashion. I didn't agree with his post, but was simply floored by how well it was written and how perfectly he put the reader inside the player's jersey. It remains one of the best things I have read online.

It starts this way:

"At the end of the red carpet stands a man. A spotlight cuts a circle for him in the big dark, a place in the arena all to himself, symbolic of the singular honour to be bestowed upon him. His hair has silvered, and the crows-feet around his eyes will soon outnumber the battle scars he won in glorious confrontation, the reminders that he once sacrificed every measure of himself to become one of the best, and the proof that the time he borrowed from the game lasted longer than for most." 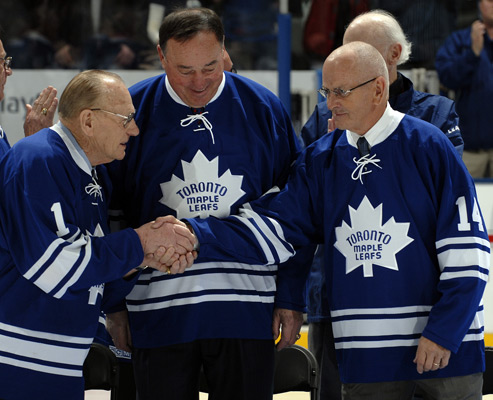 "Across his back droops his uniform, not filled now by broad slabs of heroic equipment, but by his narrowing shoulders, his folded surname barely visible amid the billowing fabric. Above him, a standard is cranking to the rafters; a banner, crested with his name and number. It finishes its ascent beside the row of others, the long line of heroes from whom he accepted the torch, the storied past from which he drew his inspiration and strength to carry his teammates to glories of their own. He always understood the great responsibility that was his, and he is proud to have held up his end of the bargain."

"Always so emotionally contained as a player, his lips quiver, and he widens his eyes in a vain attempt to preserve his manhood, but his feelings betray him at last. Twin streams run from his eyes, cutting a path through his cracking features and twisted roots of ancient stitches to drop to the ice."

Like I said, Wardo nailed it dead on. This is Dave Keon`s moment, George Armstrong's day of recognition, Johnny Bower's final goodbye, all waiting in the hands of Maple Leafs management.

Here's hoping they continue to do the right things. 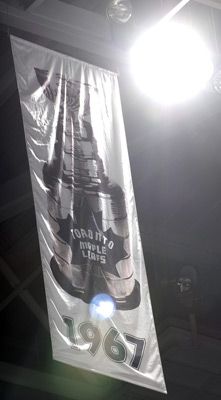 The Toronto Maple Leafs.com site has some great content on the evening. In addition to the photo's included in this post, there are several pieces of note. Check these out.

How and why Leafs are honoured.

Team history for all eras.