The Difference Between Winners And Losers

Share All sharing options for: The Difference Between Winners And Losers 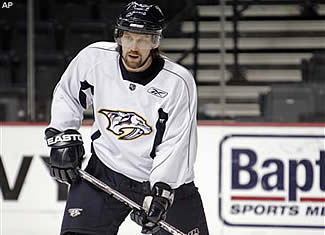 Sun Media's Robert Tychkowski has a perceptive rant in today's paper on late season rent a players such as the newly Predatored Peter Forsberg. He writes:

"They've accomplished nothing for their teams, aside from getting a couple of coaches fired, but now, thanks to the NHL's Rent -A-Player System, they are perfectly situated to win a championship."

(Note - Bertuzzi and Tkachuk have yet to be dealt. Robert)

"Deadline deals will always be a part of hockey, and it's incumbant on any GM to bolster his team for the playoffs, but I lose a lot of respect for the $5 million veteran who "wants to go to a contender." The reason his team paid him $5 million in the first place was to make them a contender."

"Tkachuk hasn't won a thing since....ever. Would going to Anaheim for a Cup of coffee suddenly make him a winner?"

"No. Just like going to Carolina last year doesn't make Doug Weight a winner. He has a ring with an asterisk on it, and if Forsberg, Bertuzzi, or Tkachuk get a ring this year, theirs will too."

Pointed words, to be sure. I agree for the most part, except that the Stanley Cup isn't won in the regular season. These Rent-A-Players do make valid contributions. Tychkowski is right in the sense that it is kind of like falling into bed with Rosie O'Donnell and waking up with Jessica Alba.

In another corner of Tychkowski's 2 page Sun spread, he relates this little ditty:

The Hockey News appears to be the latest victim of internet nerds having fun with a vote. How else do you explain the hideous Carolina Hurricanes sweater winning the coolest jersey in the eastern Conference poll, by a 12,000 to 700 margin over the second place Montreal Canadiens?