Share All sharing options for: Children Cheer On Struggling Habs 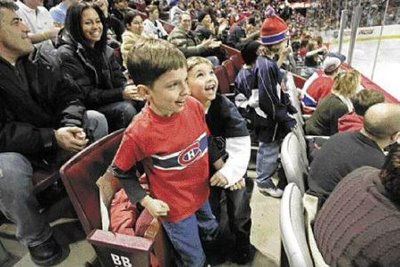 If the Canadiens needed some positive reinforcement, they received it yesterday at the Bell Centre.

The Habs were booed as they left the ice after a 5-3 loss to the Ottawa Senators Saturday night. But, a little more than 12 hours later, there was nothing but cheers as a near-capacity crowd watched the Canadiens' annual open practice.

The audience was largely composed of youngsters, whose critical instincts have yet to surface. They cheered their heroes without reservation as the players ran through a series of drills, a shootout competition highlighted by a Sidney Crosby-like move from Garth Murray and a 3-on-3 tournament that had less intensity than a National Hockey League all-star game.

Captain Saku Koivu put the exercise in perspective as he told the more than 20,000 fans that it was good to be greeted by a sea of smiling faces as the Canadiens tried to put the events of Saturday night behind them.
READ MORE