The Birth Of The NHL - A Twisted Toronto Tale

Share All sharing options for: The Birth Of The NHL - A Twisted Toronto Tale 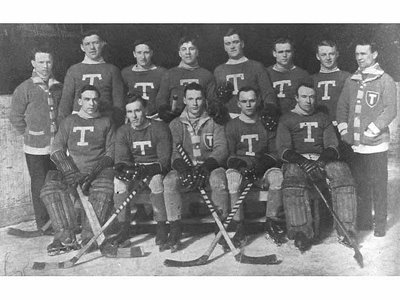 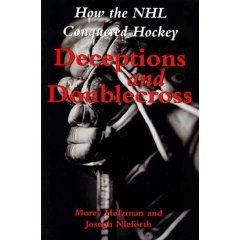 Eddie Livingstone was the principal owner of the Toronto Blueshirts, a predecessor of the Maple Leafs in the seasons prior to the formation of the National Hockey League. His many battles with fellow owners in the National Hockey Association led the rival owners to form the NHL.

His successes in amateur hockey prompted him to buy into the pro game by purchasing the struggling Toronto Ontarios of the NHA. In the 1914-15 season, the team chucked their orange sweaters and dressed in green, now calling themselves the Shamrocks. It was seen as a bold move, considering that Toronto was said to be a staunchly Protestant city.

Livingstone let the franchise go dormant after one season and purchased the Blueshirts, transfering the majority of players from one team to another. The Blueshirts, under former owner Percy Quinn, were the 1913-14 Stanley Cup champions. The NHL owners were not pleased with Livingstone letting one club go under in order to aquire another.

This would be the beginnings of Livingstone alienating other league owners. By signing the former Samrocks players as Blueshirts, the league, who were left holding the franchise, were unable to sell it as they could not fill the roster with names of familiarity.

In 1914-15, Frank and Lester Patrick owners of the PCHA and the Vancouver Millionaires would raid the Blueshirts roster on their way to winning the Stanley Cup. 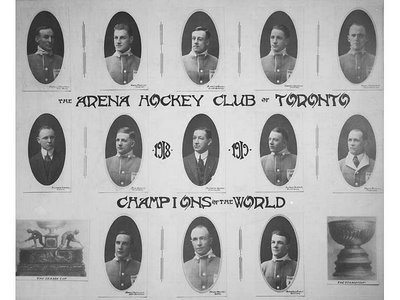 The NHA drew up a schedule based on a five team league for 1915-16, and this suited Livingstone better than it did the league.

1916-17 saw the NHA reactivate the Shamrocks and populate the team with members of the 228th Battalion of the Canadian military. A problem arose when the NHA needed to consider that the Battalion could be called into action. The NHA forced a $3,000 bond in order to keep the team active. Players already signed up in the military soon left the Blueshirts for the crosstown Shamrocks, angering Livingstone.

While the Shamrocks and Blueshirts shared the Arena Gardens, Livingstone lost the rights, ( and most likely the gate receipts ) of players such as Harry Cameron, George and Howard McNamara, Duke Keats, and Percy LeSueur. Livingstone's biggest star, Cy Denneny, found employment in Ottawa and forced a trade there. 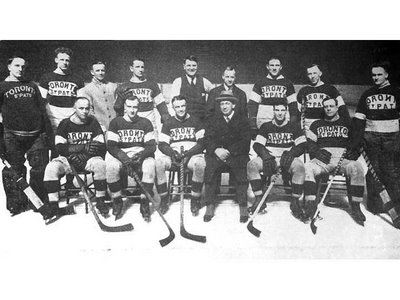 Livingstone was often accused of exploiting the NHA's rules and regulations loopholes, creating what the others termed as unfair advantages. Constantly fighting with the Montreal based owners of the Arena Garden, Livingstone threatened more than once to move the franchise to Boston.

The Blueshirts owner was also constantly in battle with Montreal Wanderers owner Sam Lichtenhein. As Lichtenhein grew infuriated by Livingstone, he offered to buy off the Blueshirts for $3,000. Livingstone countered with an offer of his own, while lines amongst team owners against him were being drawn.

On Febuary 8,1917, the Battalion were given orders to proceed overseas and it withdrew its team from the NHA. The move precipitated the league's disintegration. On the 11th, the remaining owners voted to do away with Livingstone and his Blueshirts. Seeing the inevitable lawsuits from this action, the four charter franchises, led by Frank Calder, devised a plan to oust Livingstone.

Instead of casting out Livingstone, they would form a new league without him. The reviled owner would still have his franchise, in what was essentially now a one team league. Rubbing salt in his wound, they claimed the rights to his players and divided them up amongst themselves. League president Frank Robinson stood by as all this unfolded, taking no actions to prevent it.

When the Quebec Bulldogs ceased operation for the 1917-18 season, the league offered a team to the Arena Garden's owners, filling the team back up with former Blueshirts, and naming it the Toronto Arenas.

On November 26, 1917, in a meeting at the Windsor Hotel in Montreal, the National Hockey League was born.

Livingstone was a spectator on the outside looking in when the Toronto Arena's were crowned the NHL's first Stanley Cup champions in the season that followed.

Cast aside by his former business associates, Livingstone spent the next few years in court suing the NHL for compensatory rights from using his players. He also attempted to battle the NHL product on the ice. He formed a rival league, the Canadian Hockey League, and vowed to pay his players regardless of whether or not the league could find icetime. The players still stuck with the Arena's in the 1918-19 season.

Livingstone and his teams were out of options, and he soon threw in the towel, never to return to ownership on the business of hockey.

Livingstone's Blueshirts evolved from the Ontario's to the Arena's. They were later rechristened as the St. Patricks, and finally being named the Maple Leafs in 1927 by new owner Conn Smythe, who located the team in a newly built arena.

Read more about the Blueshirts, the Arenas, and the St. Pats.

UPDATE - Proving that there sometimes several sides to a coin, Joe Pelletier has pointed out a book that details the Livingstone legend from a more complete perspective. Looks like I'll have to dig this one up for sure. It's called "Deceptions And Doublecross: How The NHL Conquered Hockey". It is a more indepth look at what went on behind the scenes at the leagues formation and includes detailed accounts of other crisis points in the league's history.

Hockey lovers will be fascinated by the truth about how the National Hockey League was founded and how, through less than savory means, it captured permanent possession of the Stanley Cup. Deceptions and Doublecross begins with the 1917 conspiracy among a Montreal contingent of the National Hockey Association to oust Toronto owner Edward James Livingstone from the league. The result was the transformation of the NHA into the NHL, with Frank Calder as president, leaving Livingstone out in the cold. Under Calder's iron-fisted direction, the NHL became the only major hockey league in North America, and gained exclusive claim to the Stanley Cup.

If you are a hockey fan, or if you think Enron was just a one-time blip on the corporate radar, you will be fascinated by the battles between Frank Calder and Eddie Livingstone, which contrary to previous publications, lasted from 1915 until 1930. Media manipulation and payoffs, shareholder lawsuits, back-stabbing, and boardroom fighting, all through the guise of nationalism and symbolism, have its roles.

For those who think they know the whole stories, you might be surprised to learn the Real Curse of Pete Muldoon, why sports editors were soft on the NHL, the true founding of 2002 Stanley Cup champion Detroit Red Wings, how a team could win the Stanley Cup before it was formed, how and why Toronto's NHL players were forced to sign five contracts in the league's first season, and how the Chicago Blackhawks almost became the first American NHL team to fail.

The authors contend that the consolidation of pro hockey teams in Eastern Canada to form the National Hockey League was often a heavy handed, nasty affair. Nieforth and Holzman make a convincing case to restore the honour of Toronto's EJ Livingstone, who Frank Calder and the Ottawa and Montreal interests despised and wanted expelled from their company at all costs. "Deception and Doublecross" seemed to be the order of the day to reach this end. Holzman and Nieforth illustrate how the arm's length relationship that is incumbent on today's media was quite different in pro hockey's formative years where newspapers editors and columnists often held controlling interests in pro teams and arenas.

I also found the book quite rewarding in that it provided some insight into the character of many players and the forces that conspired to have them play on a particular team.

What is particularly impressive about the book is that the authors have clearly spent a lot of time carefully searching primary sources to arrive at their conclusions. All are footnoted and properly catalogued to allow interested parties to do further research.

I recommend this book for any hockey fan interested in the history of the game.