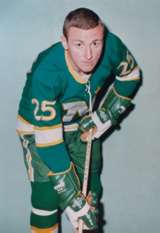 Many hockey fans have doubtlessly heard the name Bill Masterton from the annual trophy awarded in his honour at season's end. Story of who Masterton was is often singularly associated with his tragic passing as the result of an on ice incident, but Masterton was much more defined by who he was, and the perseverance he displayed on making to the NHL after years of hard work.

Masterton was born August 16, 1938 in Winnipeg, Manitoba. Growing up in hockey, Masterton had a knack for scoring goals and was often among the league leaders in that category.

At 17 he joined the St. Boniface Canadiens and in 22 responded with 23 goals and 49 points in 1955-56. Masterton and the Canadiens played in the Memorial Cup playoffs, where he tallied eight points in six games but it was the OHA's Toronto Marlboros who successfully defended their national junior amateur title.

In the fall of 1957, Masterton enrolled at the University of Denver, where he played hockey while getting an education. In four years with the school team he was one of the club's top offensive weapons, averaging more than two points per game in each of his last three seasons. Masterton helped the school to win an impressive three NCAA national titles, in 1958, 1960 and again in his senior year in 1961, when he was named the most valuable player of the entire NCAA tournament.

Following graduation, Masterton was hopeful of landing a professional job in hockey, but with just six teams in the NHL, cracking a team's lineup was next to impossible. In 1961-62 Masterton joined the Hull-Ottawa Canadiens of the EPHL, a minor pro league. Among some of Masterton's more notable teammates included future NHLers Keith McCreary, Jim Roberts, Barclay Plager, Terry Harper, Dallas Smith and goalies Cesare Maniago and Ernie Wakely.

Masterton retired from the game for a spell, but was encouraged to return after the Montreal canadiens traded his right to the Minnesoata North Stars on June 14,1967. He had toiled patiently in the minors for years, mostly in the USHL before getting a shot when the league expanded to 12 teams for the 1967-68 campaign. The expansion North Stars, after a tryout in which he surprisingly made the team, signed him to a free-agent contract. It was the thrill of a lifetime for Masterton, who had for so long dreamed about one day making it to the best hockey league in the world. 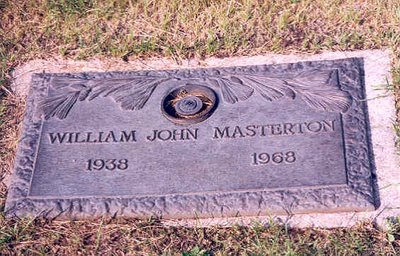 Masterton scored the first goal in North Stars history on October 11, 1967. After only 38 games in the league, tragedy struck.

During a North Stars' game against another expansion team, the Oakland Seals, on January 13, 1968, Masterton fell awkwardly to the ice, hitting his head. Bill was checked by Larry Cahan and Ron Harris of Oakland, and fell backwards onto the ice. The force of the back of his head hitting this ice caused much bleeding, and he quickly lost blood. He was seriously injured, sustaining much brain damages. Doctors were prevented from doing surgery due to complcations in the area of the brain. Two days later, Bill died. He was the first player in 40 years to die as a result of an on-ice incident in the NHL. His death would result in more intense lobbying for hockey players to wear helmets, which were uncommon in professional hockey at that time.

No other North Star ever wore his No. 19, and it was officially retired in 1987, six years before the North Stars left Minnesota.

Masterton's dedication and perseverence have been forever immortalized by the league, with a trophy named in his memory. It is awarded annually to the NHL player who best personifies perseverance, sportsmanship and dedication to the game of hockey as voted upon by the members of the Professional Hockey Writers' Association. Bobby Clarke, Serge Savard, Mario Lemieux, Cam Neely and Saku Koivu are just a few of the big names that have been honoured with the Bill Masterton Memorial Trophy in past years.