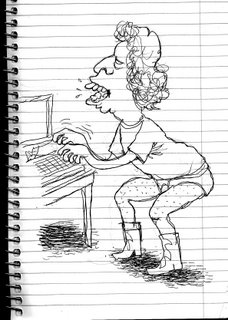 After reading through the post and comments on the "Anonymous Bloggers Hall Of Fame" at James Mirtle, I thought it would be a great idea for a tag. Check out the comments at James' site - it's hilarious. It's also a great example of what bloggers must content with from time to time.


I had my own experience with deviant anonymous commenters a few months back. After posting a particularly viscious rant following some terrible David Aebischer performances, I got hit with dozens of these misspelled drunken grammar bombs.

"your a fucken cock scuker and u know nothing about hockey..aebischer plays a unique butterfly style and got to play behind the best goalie in history..take a look at his career numbers ...100 wins 66 losses,for a colroado team that worried abotu offense and left it up to him back there to do everything he has a .914%.career which speaks for itself on how good he is.sorry buddy but your plain fucken dum..aebischer played the game of the year against toronto to..stoning them 50 times wut was his team doing in front of him..obviusy huet is playing with the top nhl goalies right now seasonw as young...abby needs a bunch of games in a row ..but he didnt get that..and if he woulda he would have eben playing the majority" Read it all! It actually gets better as it goes along. 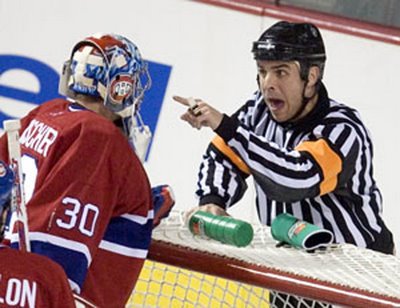 This grammatically challenged type bombed me for days until I put up a wall and he left. I kind of asked for it. I told him he must be sleeping with guy to feel the need to defend him so valiantly. He then went on a "I-am-not-gay-and-I'll prove it" rant - I wish I'd saved that one as well.

I got the notion to get this going as a tag after seeing the hand drawn pick by Mike at Covered In Oil. I am not a frequent reader at Mike's blog (so many good blogs, so little time!), I hope he doesn't mind me using his brilliant doodle to head my post.

So, the tag challenge is being offered to Waiting For Stanley, Jes Globez, and Eric at Off Wing. Let's see the best of the worst nominee's for the Anonymous Commenters Hall Of Fame. Don't hold back!