Age No Barrier For Net Ace

Share All sharing options for: Age No Barrier For Net Ace 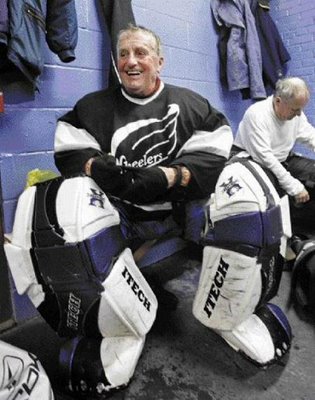 Montreal West goaltender Jack Dunn, 76, who plays on average 150 games a year, will tend goal for Team Canada at the 65 and over international tournament in Sweden.

(Note - This article by John Meager will be appearing in the Febuary 11th, Montreal Gazette.)

Life begins at 50, so the boomers like to say. At least that's what Jack Dunn has been telling anyone willing to listen since he first donned a pair of leather goalie pads - piano-heavy by today's standards - for a friendly father-and-son hockey game at Montreal West Arena in 1980.

"We needed someone to go in nets and I was helping the coach," Dunn recalled of his improbable half-century old debut. "I couldn't skate that well, so I said yes."

Three nights a week, 12 months a year, you'll find him stopping pucks from guys half his age.

"I'd say I play about 150 games a year, not including tournaments," he said.

This spring, the late bloomer will take to the crease as part of Team Canada at a 65-and-over international tournament in Sweden.

"It's like the World Cup of hockey for old guys," Dunn said with a laugh.

Surprisingly, perhaps, wearing the red Maple Leaf is not the fulfillment of a boyhood dream for Dunn, who was consumed by baseball while growing up poor in the east end of Montreal.

"I never played hockey as a kid. I had weak ankles," said Dunn, the son of a street peddler who dropped out of high school after Grade 8 to go work for Canadian Pacific Railway.

"Besides, we couldn't afford hockey equipment, and I was always a baseball fanatic," Dunn said. "We all were back in those days."

He still is, in fact.

The former Expos season-ticket holder attends baseball fantasy camps every year, playing first base and rubbing shoulders with former major-leaguers. But hockey is the game that brings out Dunn's competitive nature.

"I'm a very competitive person," said Dunn, who immersed himself in minor hockey many years ago and rose to become a Level 5 certified coach. "Whatever I do, I want to do to the best of my ability.

Dunn's competitive nature also helped him succeed in business. The street smarts he honed as a youngster running telegrams in Hochelaga-Maisonneuve came in handy when he launched his own business in 1954, Classique Alouette. Almost every Montrealer, at one time or another, has probably played on a billiards table or a pinball machine that Dunn's company arranged to be there.

As Dunn's business prospered, he and his wife, Edith, who passed away five years ago, raised three children in Montreal West. He has two daughters - Marilyn is a veterinarian, Carolyn a pediatrician - and a son, Jimmy, who is an accountant in the family business.

Dunn has played international hockey once before, in 2003, albeit for the visiting Moscow Dynamo alumni team, featuring stars from the 1972 Summit Series, against the Concordia University alumni.

"Concordia coach Kevin Figsby asked me to bring my goalie equipment to the rink just in case," Dunn recalled. "Then he leads me down the arena corridor and into the Russian team's dressing room."

Entering the sombre visitor's room was another world for the outgoing Dunn.

"The Russians don't talk or laugh before a game like we do," he said. "They're so regimented. When one guy goes to the bathroom, three guys go with him. It was very strange."

The Russians won the game 7-4 and Dunn played one period, yielding a goal to Stinger ringer Sergio Momesso, the former Canadiens forward.

At 5-foot-8 and 165 pounds, Dunn relies on quick reflexes to make most saves, although he admits he has a tendency to drop down too early.

"I'm trying to be more of a stand-up goalie," he said. "I'm always looking for new lighter equipment."

Dunn doesn't know how much longer he'll continue playing recreational hockey, but he's keeping game-fit. He often gets teased by beer-leaguers because he abstains from alcohol, preferring a postgame soft drink instead
"I work out every day for 30 minutes, play hockey three times a week, and go to the gym once a week and I have a personal trainer," he said proudly.

"You have to stay active at my age. You see it right away with guys who are not."

But there's one thing that might cause the longtime Canadiens season-ticket holder to retire from old-timers hockey.

"I've had the same pair of skates since I started," he said. "If something ever happened to them, I'd pack it in."