Share All sharing options for: When 500 points is a big deal 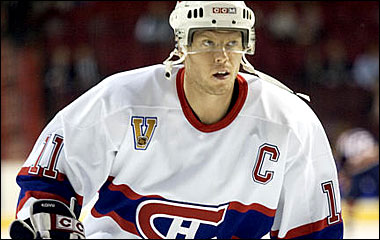 It's that biggest of round numbers. Like 1000, it's a tidy, indisputable milestone in the course of a stellar career. Those numbers form an elite club that separate the gamers from the journeymen in hockey.

Looking at the members of those respectful clubs, you soon realize that it includes all the greatest of the greats - minus Bobby Orr, of course - he of shortened numbers due to the infamous Achilles knees.

Often we look to numbers to establish credentials and make comparisons. It's the simplest way of going about it, even for the statistically challenged.

So, why then, was a big deal made out of Saku Koivu hitting a mere 500-point plateau?

It has all to do with the road travelled.

For the record, Koivu, with an assist on Michael Ryder's second goal of the game against the Thrashers on Tuesday hit the 500 point mark in his 611th game, in his 11th season. In itself, it is no lofty achievement.

Koivu has 152 goals and 348 assists so far in his career. He now sits 22nd in the Habs all-time team scoring.

If you think that's of small consequence, you know little of Koivu or Montreal Canadiens history.

Koivu was drafted by the Canadiens, 21st overall in 1993; the same year that one Alexandre Daigle went first overall and was seen as the beacon to the Ottawa Senators future. Daigle, in all his 18 years of immaturity, suggested that it was important to him to be picked first, as no one ever remembers who's chosen second. That would be Chris Pronger - remember him?

Those four, would be the only players chosen that year, with more points than Koivu today.

Koivu's story and history has as much to do with what he's done as it does with what he has been prevented from doing. Koivu, you see, is not the King Farouk of good luck.

Nine of Koivu's 11 seasons have been hampered by injuries and illness - the illness being the 2001-02 campaign, where he was felled by cancer in his stomach. Non-Hodgkins lymphoma took away all but three of Koivu's 82 games that season. That Koivu was able to return at all, in the midst of the same season in which he was diagnosed, treated, and rehabed, remains somewhat of an incomprehensible miracle. That he returned strong enough to help push the Habs past a first round upset of the Bruins, remains completely absurd - almost legendary in Habs myth.

Teammate at the time Doug Gilmour, who has seen a bit in hockey, called it the most incredible thing he has ever seen.

Koivu seems to have had an aura of a superhuman since.

The following season. Koivu played all 82 games for the Canadiens, and set career highs in goals, assists, and points. In the four seasons following the cancer diagnosis, he has missed but 25 games. 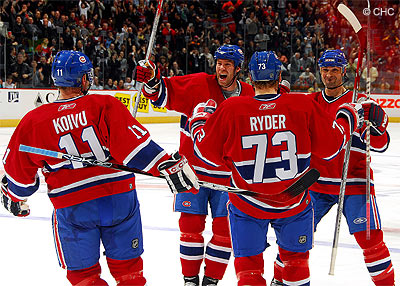 The following season, Koivu hit his stride, and after 20 games was the unlikely NHL scoring leader.

The future looked so promising at that point, that Koivu inevitably became the team's number one centre, much to the dismay of Turgeon. Along the way, with Damphousse often employed in both checking and offensive roles, Turgeon balked first. Unproductive and relegated to third line duty, Turgeon requested a trade and GM Rejean Houle unwisely complied, shipping him to St. Louis for Shayne Corson and Murray Baron. In Turgeon's last game as a Canadien, he was employed as Koivu's left winger, and notched four assists, before being dealt the very next day.

Funnily enough, in the whole of the city of Montreal, only Patrick Roy was quietly furious.

Koivu stayed atop the league leaders until a knee injury against Chicago stopped him in his tracks.

For years, he would be hard pressed to become the same player again.

Injuries and a depletion of team depth, spiralling downward as a result of Roy's trade to Colorado, made it so that Koivu would never play for such a strong team for quite some time.

Between that time and now, Koivu reinjured both knees more than once, had a shoulder separation, became the team captain in 1999-2000, and endured both the focus of being the number one center and go-to-guy, and the pressures that came with failures of his surroundings.

Twice since, he has had to deal with career threatening ends.

First there was the aforementioned stomach cancer, and last season's playoff eye injury, that has left him with less peripheral vision in his left eye.

Koivu has developed a cataract, that will need off-season surgery, arising from the injury.

From the opening dates of training camp this season, Koivu has played as if his injury history was nonexistent.

He has battled and grinded in his usual uncompromising style. He has forged a compatability with three revolving linemates. His play in several facets of the game have improved, namely penalty killing, faceoffs, and powerplay proficiency. He leads the team in scoring.

The 32-year-old captain may well be a beneficiary of happy circumstance, finally.

The Canadiens team is deep on many levels, like it hasn't been since 1995-96. He finally has linemates that can measure his dedicated effort with their own pasion. Those with whom he shares the ice are a capable, talented, and unified group, alleviating the often burdensome load he carried in the past.

Prior to him reaching his 500th point on Tuesday, Canadiens coach Guy Carbonneau heaped praise upon his captain's accomplishments, if not in an awkward spot, while asked to comment on Steve Yzerman, earlier in the week. The Red Wings great had just had his jersey retired by the team in an unprecedented and glorious ceremony in Detroit.

Carbonneau happened to mention both captains in the same breath - much to the misappropriation of several media eyes and ears with pens scribbling on paper in hand.

What Carbonneau suggested, in merely a passing manner, was that Montreal had in its midst the same type of captain.

His comment ended there. To say it went over somewhat crooked, would be sizing it up fairly.

Carbonneau did not compare numbers, ultimate achievements, or stature in his passing remark.

It wasn't the first time Carbonneau has been outspoken - and surely not the last.

A day later, after Koivu's achievement, he was brought back to his initial quote.

For full marks, Carbonneau didn't back down on his initial statement, rather he zoomed in on the original intent of his words.

"Saku Koivu has the city of Montreal, the Canadiens team, its fans, and the ultimate goal, in his heart", Carbonneau summised.

In stating that way, the allusion to Yzerman became clearer without doubt: to hell with goal and assists!

After setting up the Canadiens fourth goal, the house announcer quickly parlayed what many in attendance already knew.

While the crowd cheered and quickly stood to aknowledge and applaud, the camera zoomed into a focused but distracted Koivu.

A game was still on the line, with a few minutes remaining.

The applause grew to a standing ovation while play went on, with Koivu seated on the bench, nodding accordingly, gaze focused on the ice.

Chants of "Sa-ku, Sa-ku, Sa-ku" rose, then faded, right until the games final seconds, as the Thrashers came within inches.

After the game, it was revealed that Koivu had forgotten to get a hold of the puck. Luckily, an official had taken it to the bench without his knowledge.

This 500th point is just one mountain peak on the way to Everest!

(For the sake of facts, in 611 games played, Koivu has averaged .820 points per game. Had he participated in all games in 11 seasons, his points total would be 716.)