Share All sharing options for: Warrior Yzerman Honoured With Class And Dignity 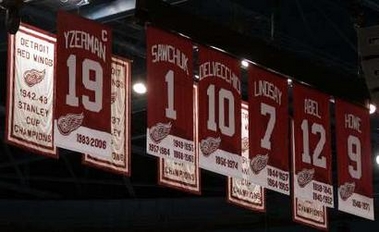 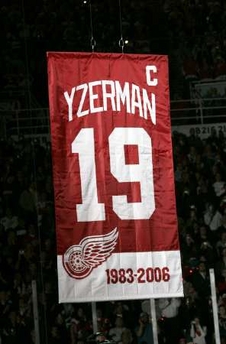 The Detroit Red Wings organization put on a jersey retirement show for the ages tonight in honouring the career, the man, and the player who is Steve Yzerman.

The team spared little expense in celebrating the longstanding captain known to the hockey world as "Stevie Y". A large gathering of former teammates, coaches, and Red Wings great were on hand to witness number 19 being raised to the rafters.

Among those on hand for the event were Gordie Howe, Brett Hull, Ted Lindsay, Bob Probert, Larry Murphy, Jacques Demers, Vladimir Konstantinov, Dave Lewis, and the coach who turned Yzerman the scorer into a more complete package, Scotty Bowman.

Players came onto the ice adorned with every jersey Yzerman wore during his storied career, including his Peterborough Petes jersey, his many All-Star game jerseys, and his team Canada jerseys. It was a respectful touch of class from an American based team. 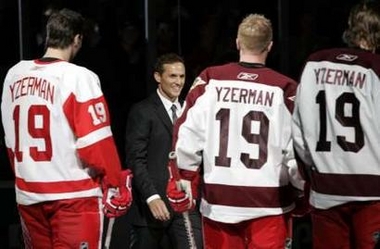 Expect this type of career recognition to become the norm in future ceremonies involving players of Yzerman's stature.

Yzerman entered onto the red carpet for the ceremonies to the strains of the Tina Turner hit, "Simply The Best".

Yzerman, who was named captain in 1986 when Demers took over as coach, retained the "C" for a league-record 20 seasons. While he is widely regarded as one of the best leaders in NHL history, the player known as "The Captain" attempted to downplay that reputation. 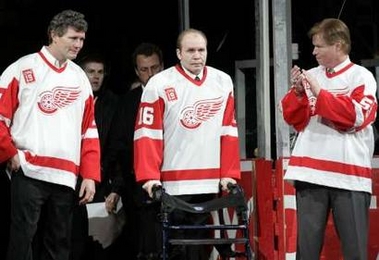 "My jersey is going to go up there and I hope as you watch it go up, and when you come back and see it, you give yourself a pat on the back because you're a big reason why that jersey is up there," he said. "It doesn't represent what I did, but what we did as an organization."

"I feel like my image as a great leader is greatly overblown because I played with some of the greatest hockey players," said Yzerman, a comment that was met by groans in the sold-out crowd. "I stand here humbly saying 'Thank you.' Any personal success I had was because of the great players I played with." 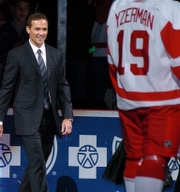 Yzerman retired last summer at the age of 41 after 22 seasons - all in Detroit - and stayed with the organization as a vice president.

He led the Red Wings to Stanley Cup championships in 1997, 1998 and 2002. His career ended with 1,755 regular-season points, a total that led all active players last season and trails just five in NHL history.

His jersey became the sixth retired by the storied franchise and was hoisted to the rafters alongside Gordie Howe's No. 9, Ted Lindsay's No. 7, Terry Sawchuck's No. 1, Alex Delvecchio's No. 10 and Sid Abel's No. 12. 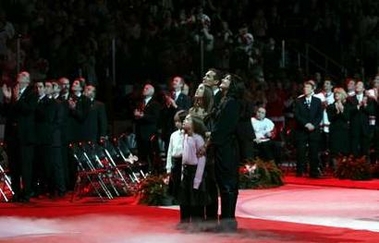 Yzerman set a franchise-record 1,063 assists and trails only Howe with 692 goals.

"That was not bad for a player who put offense on the back burner halfway through his career," Red Wings senior vice president Jim Devellano said.

The year before Yzerman was drafted, the team dubbed the "Dead Wings" gave away a car at each home game to spur interest because the previous season there were just 2,100 season-ticket holders. 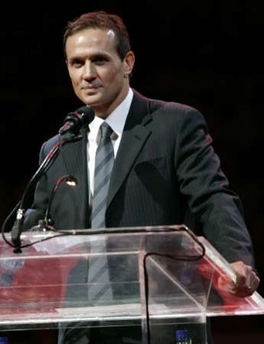 Detroit drafted the skinny, talented player that few non-hockey gurus knew - with a last name few could pronounce - with the fourth pick overall in the 1983 NHL draft. They were hoping to land the player chosen right before, local prodigee Pat Lafontaine. Settling for Yzerman was never difficult.

During his career, the team became wildly popular and regularly sold out Joe Louis Arena while being one of the elite teams in the NHL.

"I vowed to rebuild the franchise through the draft and that began on June the 8th, 1983, at the Montreal Forum," Devellano said. "We knew he was good, but oh, what a cornerstone he turned out to be." 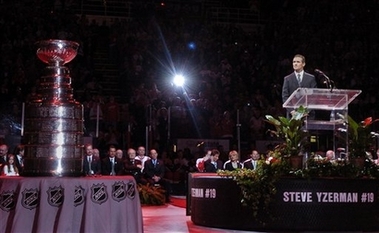 Yzerman was a sensational scorer - lighting the lamp 228 times in a four-season stretch - during his early years before Bowman helped him become a two-way player that was respected for his backchecking almost as much as his shot.

Toward the end of his career, Yzerman's banged-up body took him out of the lineup and often slowed him when he was on the ice.He missed the first 66 games of the 2002-03 season following a knee surgery that involved sawing into the bone below his knee and using a wedge to realign the joint. Bones in his face were shattered and various other ailments hurt Yzerman but didn't damage his competitive spirit.

"No player I ever coached could play with a pain threshold like Steve Yzerman," Bowman said. "I treasure all of my Stanley Cup triumphs, but none like the one when Steve handed me the Cup (in 2002) following the game that would be my final game as coach."

"I'll never forget the 2002 playoffs when Steve could barely walk up the steps to get onto the team plane," said Lewis, who played with Yzerman and was later his assistant and head coach. "Then, when he got on the ice, you wouldn't even know he was hurt because he was such an unbelievable competitor." 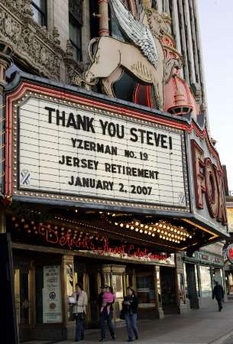 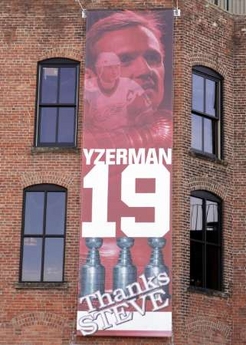 Canadiens head coach Guy Carbonneau, speaking in Montreal prior to his club's game versus Tampa Bay, said Yzerman was deserving of everything being said of him.

"He's always been a professional on and off the ice and I think he deserves everything he's got now," Carbonneau said. "It's funny. I remember Steve earlier in his career when he was mainly an offensive guy, where he didn't really battle on faceoffs.

"And then I think he really became the player he is when he decided to play a little more defensively. I thought he got more respect playing hard, blocking shots and taking pride in winning faceoffs than maybe earlier in his career."

On a puck-shaped podium at center ice in the middle of a red-carpeted "C," Red Wings captain Nick Lidstrom presented Yzerman and his family with a trip to Austria to watch the 2008 Euro Cup finals. Owner Mike Ilitch gave him a 2007 Chevrolet Tahoe.

During a pregame gathering, a proclamation from Michigan Governor Jennifer Granholm was read and it designated Jan. 13, 2007 - the date of Detroit's next home game - as "Steve Yzerman Day."

Detroit Mayor Kwame Kilpatrick dubbed Tuesday "Steve Yzerman Day" and presented Yzerman with a key to the city. Kilpatrick also said the intersection of Third and Atwater Streets, which meet at Joe Louis Arena, will be changed to "Yzerman Drive."

After the ceremonies Yzerman reiterrated that his leadership was overplayed.

"I played with so many great leaders on these teams, it's unfair to them to focus on just me."

Like all the best leaders, Yzerman long ago understood that it's the example that leads, and that the leader follows. Individuals do not win Cups, teams do. Teams with more than one leader.