Share All sharing options for: Steve Yzerman Night In Detroit 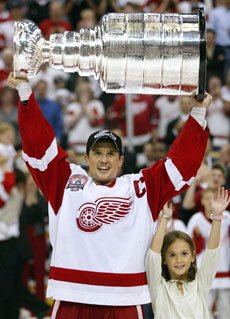 
These are just a few of the adjectives used to describe Hockeytown's Steve Yzerman.


Once he was scoring machine that used to single-handedly destroy the opposition with mind-boggling individual efforts night after night. Later he became forever remembered as the grizzled veteran captain that puts the team ahead of himself and accepts responsibility for all situations on the ice. Steve Yzerman is a winner.


Tonight, one of the greatest Red Wings of all-time gets the ultimate honour. More.