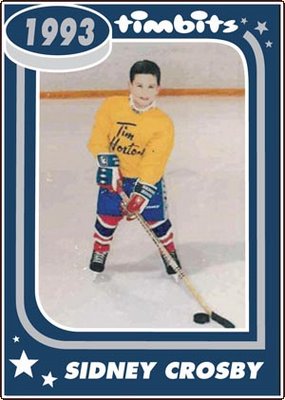 I've had some folks asking me lately if the Sidney Crosby Timbit card from the commercial was available for sale. They wanted to see if his minor hockey league stats would be on the back of it.

I'm still in the midst of locating all those statistics, but here are a few.

If you haven't yet seen the ads, they are pretty cool.

On December 13th,Tim Hortons announced a multi-year partnership with Sidney Crosby. Crosby will lend his name to the program where he started, Timbits Minor Hockey.

Sidney has a natural connection to Timbits Hockey through his participation back in 1993. At age 5, Sidney played for the Cole Harbour Timbits in Cole Harbour, Nova Scotia. Standing at 3' 11" Sidney wore jersey No. 8 , Montreal Canadiens socks, and played centre, clearly a sign of things to come.

"I am proud to represent Timbits Hockey," said Sidney Crosby. "In my early days of playing hockey, my parents and coaches always reinforced the importance of having fun. That is something I take to the ice with me everyday."