Share All sharing options for: A Sheldon Souray Appreciation 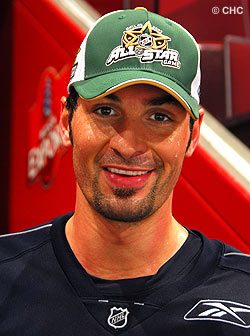 Habs fans were a happy bunch upon hearing the news that Sheldon Souray was voting onto the All-Star games starting lineup for the Eastern Conference. He's had a great first half of the season, and is well on his way to a career year.

Hopefully his association with the Canadiens continues beyond this. Since coming over in a trade with New Jersey, Souray has done nothing but flourish, and is now the NHL's premier power play defenseman.


His goal today against the Senators in an 8-3 shellacking ( I'm getting around to the Habs current woes soon as I can figure out what the heck's going on!), was his 15th off the year. Not only did the goal match a career high for him, Souray also set a Canadiens record by defenseman with his 12th PP goal of the season.

In last Thursday's game against the Flyers, Souray did something I've rarely seen in all my years watching hockey. While killing a penalty, Souray received the puck directly from the faceoff and blasted it at the Flyers net from his own blueline. He hit the flipping crossbar, for Christsakes!

"Holy smokes", I was thinking. "Had that gone in, the highlight would have reverberated around the league at lightening speed!"

The official positionned just inside the Flyers blueline thought it was a goal and quickly called for a review of the play.

I didn't think it had gone in, but I sure was hoping it had.

My first thought was, "I hope this finds it's way to YouTube in a hurry!"

I didn't take too long - two days to be exact! While looking it up I came upon a good variety of clips on Souray.

If the NHL is looking to it's players and personalities to sell the game, Souray is as charasmatic as they get.

Watch these clips and you'll get an idea why, he along with the Crosby and Ovechkin types, can sell the game best with a combination of on ice prowess and off ice coolness.

This is first clip is that shot wrung off the post last Thursday.

Here's one from the 2003 All-Star game's hardest shot competition that he almost won. Both he and Adrian Aucoin rofled off drives of 102.2 mph. Aucoin won the round with a better average on previous shots.

Earlier this season, Souray was given a mic to wear during the game, when this funny moment happened on the bench.

This is his goal against the Rangers just a few games back. Poor Henrik Lunqvist! After stopping Souray's initial drive, he kicks the rebound right back to him.

ET did a feature on his home pad and lifestyle. It would be extremely cool to see more players featured this way.

Dropping the gloves with Derrian Hatcher earlier this year.

In the shootout versus Toronto awhile back, everybody expected Souray to wind up and blast it. At the last second he deked, fooling the Leafs Andrew Raycroft and everyone tuned into HNIC, in the process. Too sweet!

One of his better tilts with the equally charismatic Darren McCarty of the Flames.