Share All sharing options for: Price Is Right In Canada's Triple Play

The Canadians boys have done it again, bringing home the gold medal for a third straight year at the World Junior Championships.

It started to look like a walk halfway through the game, as Canada led 4-0. The Russian Juniors quickly stormed back with a pair of goals, and the boys battled hard to hang on.

The win is their 18th consecutive in the annual tournement. 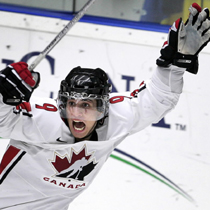 Canada's big heroes were goaltender Carey Price, wh0 was named tournament MVP, Jonathan Toews, who scored 3 goals during Canada's shootout win over the U.S. two days ago, captain Kristopher Letang, who was rock solid on defense in each contest, and Luc Bourdon who netted the game tying goal that enabled the Overtine against the U.S. Wednesday.

Price, Toews, and Letang were all named to their positions as tournament All-Stars. 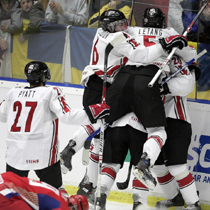 The win is Canada's 13th at the WJC, which moves them ahead of Russian for most championships at the annual event. 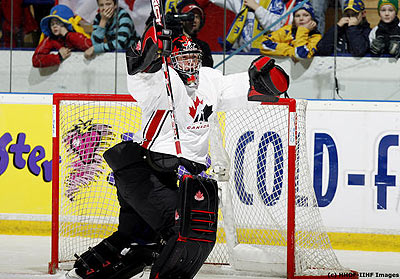 Price, who earned both top goaltender and tournament MVP honors, made 25 saves in the clinching game against Russia to end the tournament with a perfect 6-0 mark and an impressive 1.14 goals against average.

The 19-year-old netminder almost single-handedly dragged Team Canada into the final with his brilliant performance in the semi-final against the United States. Price made 35 saves in a thrilling 2-1 shootout victory that saw him escape unscathed in an overtime frame where Canada was outshot 12-2 by Team USA. Read more. 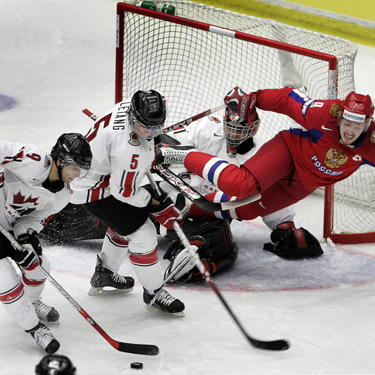 "It’s unbelievable, a great feeling," Canadian forward Jonathan Toews told TSN. "Tonight was a battle from start to finish. The Russians are a great team but we came out hard and finished hard, too."

Canada rode its excellent goaltending, defencemen and special teams to the final and the only question mark then was whether the team could produce enough goals at even-strength against the skilled and speedy Russians.

The Canadians were snakebitten in their semifinal against the U.S. and won that game 2-1 via a shootout.

But University of Michigan forward Andrew Cogliano, Bryan Little of the Barrie Colts and North Dakota forward Toews all scored in a five-minute span starting at 15:35 of the first period, with power-play goals by Little and Toews. Read more. 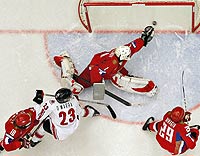 Team Canada saved its best stretch of hockey for the biggest game of the world junior championship.

With a thunderous opening period, the Canadians rolled out to a 3-0 lead on Russia and never relinquished in a 4-2 decision in Leksand, Sweden. The win gave Canada its third-straight world junior gold medal and marked the nations 18th victory in a row, stretching back to the round-robin opener in 2005.

Andrew Cogliano scored his first goal of the tournament, 15 minutes in, to put Canada ahead. Less than two minutes later, Bryan Little potted his first and Jonathan Toews made it triple-salvo just 33 seconds later. More.

"I actually didn’t feel [as nervous] as I did during the shootout. When you play behind a [defence] like we have, it’s pretty easy to play. They just let me play my game." More.