Share All sharing options for: Patrick Roy Charged With Assault 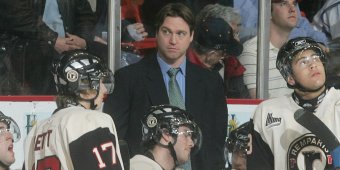 FOLLOW UP: See the update at the bottom of the page for additional news on this story.

Roy, who both owns and coaches the Quebec City Remparts of the Quebec Major Junior Hockey League, is accused of hitting an opposing team's owner.

Police say about 50 fans of the Chicoutimi Sagueneens prevented the visiting Remparts players from boarding their team bus after a Friday night game.

Roy reportedly then got off the bus and attacked Sagueneens owner, Pierre cardinal, striking him several times.

Police say they will interview witnesses before meeting with Roy in the coming days."We were called to the scene to register an assault complaint against Mr. Roy,'' said Bruno Cormier, a spokesperson for Saguenay police.

"There was work done by our officers with witnesses of the incident and it all will be handed over to the office of criminal investigations.''

This is not Roy first accusation of the sort. In 2001, Colorado officals charged Roy with domestic abuse in a case in which the charges were later dropped.

UPDATE: Some interesting details have surfaced on this story during the first intermission of the Canadiens - Sabres game. As some may know, Habs coach Guy Carbonneau is a part owner of the Chicoutimi junior team, and very close friends with Patrick Roy. Upon being questioned by the media, the coach claimed that he'd spoken his co-owner briefly and did not have all the details on the scruffle.

I doubt that very much. He has a very detailed account, I am sure.

Carbonneau simply stated that these types of things have gone on forever in junior hockey and it will all come to pass soon enough.

In the broadcasters booth, the four gathered commentators had great laughs over the entire thing. Bertrand Raymond, the Hall of Fame scribe who is from Chicoutimi called team owner Pierre Cardinal a real "trou de pites", which loosely translates into "arsehole". If my friend Maurice Richard is reading, he could translate it better than me so I hope he drops by on it. (Yes I actually have a friend by that name, he also has a brother named Henri - a feature on them is coming down the pipe soon!)

What Raymond was getting at, was that if anyone could make a person irritable enough to go completely wild on them, it is Cardinal. He simply has that effect on people. Mix in a bunch of junior hockey players trying to leave the scene after a loss, some frienzied fans of the winning team surrounding a bus as it tries to leave, and Patrick Roy, who's not known to back down, and this is what you get.

Raymond also told of witnesses account that said Roy never struck Cardinal once, he simple latched onto his jacket collar and gave him a hearty shaking.

Roy's Quebec Remparts are 0 - 6 against Chicoutimi this season, which would explain Roy being pre-agitated, prior to boarding the bus.

Oddly enough, Roy and Cardinal were seen sitting together just last week at the banquet in Quebec City during the Future Stars game, enjoying a beer together. It is highly probable that, as Carbonneau said, nothing much will come of this.

It has got me thinking though, with Roy being such a calculated battler, that perhaps their is a method to his madness. This makes two incidences of odd public behavior that involve Carbonneau on the periphery of the story. First there was the comments about Guillaume Latendresse, and now this little spike with Carbo's co - owner. Could it be that Roy is trying to keep Carbonneau mind off the game as a sinister motive to undo the coach in order to eventually replace him.

I bet some La Presse hack will run with this angle soon as it's seen in that light. Expect it!