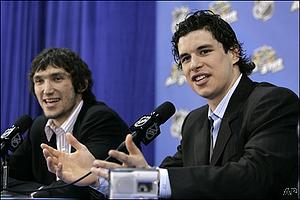 If you were one of those wondering what the heck happened to Ovechkin during the skating drill, you're not alone.

According to Martin Leclerc of Le Journal de Montreal, Ovie was a busy boy the night before. Leclerc writes:

"Hockey fans in a stylish Dallas pub got quite a surprise Monday night when Alexander Ovechkin, Evgeni Malkin, and Dion Phaneuf showed up together at the pub. Partyers at the club didn't hesitate to coax the three young stars into a shooter contest - and we're not talking with hockey sticks here. Not ones to back down, the two Russians and the Canadian, it is told, showed they weren't born yesterday and handled everything put in front of them. Nothing scandalous about this - the youngsters have planty right to have a little fun from time to time. Aren't the All-Star festivities a time to party, after all?"

Leclerc also caught coach Lindy Ruff putting on reporters covering the game, who were none the wiser.

If heard some of the questions coming at players from the media, it's all you can do not to fall down laughing.

When asked a Les Nesman type reporter, what it felt like to be the "cat's meow" of whole deal, Sidney Crosby almost choked on a Penguin. Laughing he said, "I don't know how to answer that question seriously!"

As for Ruff, he was asked if he planned to make use of his team in the same manner as he does behind a Sabres bench.

Putting on the most serious face imaginable, the coach leaned forward in his chair and said, "I have an 0-1 record at this game, and I have every intention of leaving here with a .500 record. For that reason, Bob Hartley and I have set aside three hours for a reunion on game strategy later on this evening."