Oh Hell, Not The Red Wings! Not Now!

Share All sharing options for: Oh Hell, Not The Red Wings! Not Now! 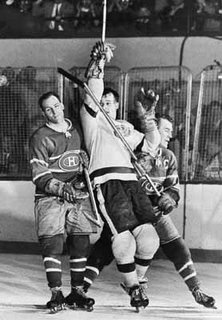 Just what the slumping Habs needed, a date with the Red Wings!

I fear a pummeling coming on. I can't help it.

Just the notion of the Winged Wheels sets my mind back a decade to a horrifying night when the greatest goalie of all time was left for humiliation, only to humiliate himself further, setting the wheels in motion for the disastrous Habs years that followed.

I ought to hate the Red Wings for it, but I don't. I actually love the Wings. My second favorite team, to be honest. Something to do with the class of the organization from top to bottom.

Whatever happens tonight, at least I get to watch the two teams play each other for the first time in three years.

Ever wonder why Detroit, in an Eastern time zone, plays in the Western conference? The Habs and Leafs miss these contests. Never mind the realignment plan to bring Columbus east - chuck the Thrashers out west and replace them with Detroit.

The victim, sorry, the goalie for tonight's game is said to be David Aebischer, according to the Montreal papers. He has a lifetime record against the Wings of a win and seven losses and GAA of 3.26. Yikes! 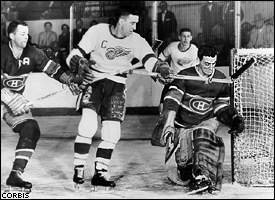 Perhaps the Canadiens tiptoe through the Senators mine field Saturday will serve them well. Coach Carbonneau didn't exactly wear the team out during practice yesterday, prefering to have a good team meeting to set things straight scrubbing some dirty dressing room laundry.

The Canadiens perilously hold onto 4th place in the East and need to get on track pronto. Any type of skid in the tight race will have them freefalling out of a playoff spot within a week.

A respectable showing would help. A tough week lies ahead, with games against the Canucks tomorrow and then in Atlanta Thursday before rounding up with a meeting against Buffalo Saturday. Anything less than a pair of wins in the next four games and it will the time to yank the panic shute.