Share All sharing options for: My Daily Newspaper Reading Routine 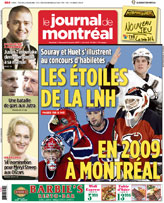 As a Montral Canadiens fan, it has always been a priveledge to me to be able to pick up read whatever french Montreal daily's I can get my hands on. Reading them for years has actually helped me maintain my second language quite well, in addition to getting the best and most concise news on my team and the NHL at large. Living roughly 65 minutes from Montreal, in Cornwall, Ontario, being afforded bilingual media access gives me great insight into what is two very different life sensabilities and perspectives.


My favorite paper has long been Le Journal de Montreal for its sports section, which trumps that of any newspaper in Canada. No paper comes close to it in hockey coverage. Not the Sun chain, not the Toronto Star, not the Globe and Mail. It has to be experienced to be believed.

While most papers now tend to defer it's readers to online coverage, the JDM still packs its pages full of punch. Consider today for example. There were no NHL games last night and the Canadiens have not played in 6 days. That didn't prevent them from filling 14 pages with hockey content, and not all of it based on the Habs.

Now the 14 pages today, there were 38 different articles and sidebar pieces of information. This does not include its daily two page spread foldout of stats and and standings for every hockey league you've ever heard of, updated day by day, with no cutoff time like your lovely Sun chain, which often doesn't even include the Senators final scores. Speaking of scores, they usually run a page or two filled with game summaries also.

Other sports are covered, somewhat less indepth. There were 11 pages filed with baseball signings, the Super Bowl, etc.

The hockey section of Le JDM has tons of clout due to a pair of Hall of fame journalists in their midst, columnist and editorialist Betrand Raymond and Yvon Pedneault, one of the best connected sources for news in the NHL and a man highly ranked in THN's "Most Powerful People In Hockey" listing. They dominate the paper not only with their input, but also their influence. Pieces that contain their opinions are usually quite profound - this ain't Damain Cox or Bruce Garrioch here, spouting the usual "Go Home Team" assembly line gibberish.

Translated to English, the hockey based articles in today's paper were:

Cover Story - A Hockey Fan Poll on the Canadiens season so far and questions on how things will go down the stretch.

Which player do you feel should be dealt? Samsonov 13%, Aebischer 11% Kovalev 8% Niniimaa 7%

Poll #2 Do you believe the Canadiens can win the Stanley Cup this year? 76% No 9% Yes

(IMO- Sakic and Gomez are unavailable. There have been rumblings about the other 8.)

Poll #5 How do you rate the Canadiens performance in the last month? Excellent 1%, Good 22%, Satisfactory 40% Terrible 34%

The Public Has Spoken (Jonathan Bernier)

Canadiens To Reach Playoffs, But Not Much Else...(Pedneault)

Sabres And Ducks In Final (Sidebar)

In The Eyes Of The Experts - The opinions of 7 columnists including Raymond, Pedneault. Jacques Demers, and Michel Bergeron on 5 questions about the Habs needs and wants as the trade deadline approaches.

Forsberg...And Not Much Else (De Foy)

Roy Back Behind Ramparts Bench (No Credit)

What If The Predators Chose Kansas City (Leclerc)

Crosby On The Outside At ASG Private Party (Leclerc)

3 On 3 League Starting In May (Vachet)

Most days the paper is not so intense. Two or three times during the week, the NHL content is toned down a touch and the QMJHL gets the spotlight some. On average, there is about 75% of the coverage above. If you were to subtract the "Poll Results", you'd have a fair idea.

This is why the JDM has been my prefered resource for over 20 years.

Now reading just one paper would be a great way to gain a narrow view of things. Luckily I read pretty fast and sieze things well enought that at my morning coffee stop that I can rip throught the remainders of the Gazette, Sun, and Star sports sections within 10 minutes.

Nothing starts off the day like a warm cup of coffee and some interesting hockey news. If I'm not working that particular day, I have the rest of it to blog and read blogs. Normally I will peruse at least half the sites I have linked to, going back to certain ones often enough.

It's a great and informative daily routine.