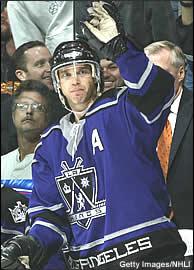 Luc Robitaille, whose jersey number 20 get the Kings royal treatment tonight in Los Angeles, has always found a way turn a bad situation into a better one.

His 2002 Stanley Cup win with the Detroit Red Wings serves as a classic example of such fate.

The player who was drafted so far down the pecking order, that few doubted he'd have an NHL career, retired last season as the game's most prolific left winger in history. Forever associated with the Kings history, many doubted he would taste Stanley Cup victory in Los Angeles. Although coming close in 1993, Robitaille entered his twilight seasons still a productive player, but team playoff hopes waned, nevermind Cup glory.

After a surprising 2000-01 campaign that saw him finish 12th in league scoring with 37 goals and 51 assists, Robitaille was involved in a contract snag with good friend and GM Dave Taylor. The GM, on orders from the team, was instructed to tighten the budget. Caught in between organizational loyalty and friendship, Taylor lost Robitaille to free agency. The player was 35 years old.

As Robitaille's current deal was about to expire, Taylor promised a new offer within days. The two went back far together, not only being teammates, but also roommates on roadtrips.

With Robitaille free to sign elsewhere come July 1, Taylor chose to wait until the 29th of June to offer the player a contract that paid him less than the previous deal.

"It was probably the only time in my career that I had anything close to a confrontation with anyone", said Robitaille, looking back on it.

"I surely would have preferred he call me a month sooner and tell me that he was being clamped down in budgetary restrictions", he added.

Robitaille called Taylor, upset and wearing his heart on his sleeve.

"We were roommates, Dave. You know me well enough and you know what I mean to the team. You know what it means to me, the Kings are my team. I want to stay in L.A., but don't try and screw me."

Taylor responded by suggesting that at age 35, he himself had to take a rollback.

"With all due respect", Robitaille shot back, "At 35, you weren't the teams leading scorer, nor were you among the leagues best."

Taylor suggested that Robitaille explore the free agent market, get back to him, and that the Kings would match the offer.

"Dave, we know each very well. You know I'm not the fastest skater or a guy with the hardest shot. There might be areas where I'm lacking but not of pride and dignity. I would never do such a thing as shop myself around with those type of intents. If you don't feel I deserve a new deal by tomorrow, that's fine, I'll play somewhere else even if I have to play for less. I have my principles."
Taylor treated it as a bluff.

The following day, Robitaille contacted his agent Pat Brisson to go over offers from other teams. Detroit, who'd just signed Dominik Hasek, were very appealing to him.

"I was really fortunate, the Red Wings were willing to negotiate on the spot", said Lucky Luc, who went on to win the Stanley Cup with Detroit in his first of two seasons there.

Robitaille would return to the Kings after that stint after a reconcilliation with Taylor. The friendship remains intact to this day.

Robitaille has no regrets over how it happened.

"I could never negotiate in bad faith with another team that showed interest in me. It just wasn't how things worked with me. It would not have been the right thing to do."

For Lucky Luc, his honesty and straightforwardness rewarded itself with a Stanley Cup!
For more stories on Robitaille and his retirement ceremony, check out what the Ottawa Sun and L.A. Times have to say. The NHL.com site has an interesting story on Robitaille's generosity from last season. Legends of Hockey has a preview of tonight's ceremony.