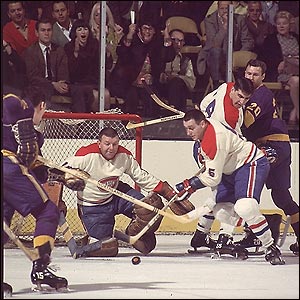 Hall of Fame goaltender Lorne (Gump) Worsley passed away Friday at age 77 at his home in Beloeil, Que.

He died at the Honore Mercier Hospital in St. Hyacinthe after he suffered a heart attack on Monday.

He had been ill for four years, his wife, Doreen Chapman, told The Gazette last night.

"He was a terrific goaltender," former North Stars teammate Lou Nanne said. "If I could pick any goalie to win a big game, it would be Gump.

"He was one of the real characters in the NHL. He had a lot of personality and really showed the human side of the game. He didn't look like an athlete and smoked like a chimney between periods, but he was terrific when he put the pads on."

The Gumper was among the last of a fading breed: the maskless goalie. He was among the last goaltenders to opt for a face mask, making the move not long before he retired in 1974 after spending most of his 21 seasons in the NHL looking shooters straight in the eye.

Gump Worsley was hockey's hard luck goalie for over a decade before joining the Montreal Canadiens.

Nicknamed for his likeness to cartoon character Andy Gump, Worsley was a seemingly happy-go-lucky soul who would bravely stand in his net, collecting over 200 stitches while claiming "my face is a mask."

Born in Montreal in 1929, Worsley grew up in extreme poverty. The great depression left his family penniless, but this did not stop Gump from dreaming of becoming a big league goalie. Worsley, who had to borrow equipment for much of his youth, did not dream of playing for Montreal Canadiens. Instead he admired Frank Brimsek of of the Bruins and Davey Kerr of the Rangers.

Employing the old stand-up style of netminding, Worsley advanced from the Verdun Cyclones junior team, he would turn pro in 1948 as a New York Ranger farmhand. Despite numerous All-Star seasons with several teams in several leagues, it wasn't until 1952-53 that Worsley got a shot at the NHL. Rangers starter Chuck Rayner was injured for much of that season, and despite a last place finish Worsley impressed enough to earn the Calder trophy as the NHL's best rookie.

The short and stocky Worsley never would have expected what would happen next.

The following season the NHL's best rookie never had a chance to play. Instead he was sent to Vancouver Canucks of the old Western Hockey League. While earning a league championship and top goalie and MVP awards with the WHL Canucks, Worsley watched his replacement in New York, Johnny Bower, flounder.

1954-55 saw Worsley return to the Big Apple for the next decade, though that wasn't necessarily a positive thing. The Rangers continued to be completely hapless, surrendering nightly onslaughts of 30 and 40 shots a night, leading the quotable Worsley to term his experience there as a "jailhouse." A reporter once asked Worsley which team game him the most trouble. Gump quickly answered, "The Rangers."

Gump came across as lovable and admirable on the ice and in the eyes of the public, but he actually suffered from depression and alcoholism during his tenure in Manhattan.

Worsley baited coaches, particularly Phil Watson. "As a coach, he was a good waiter," Worsley said of Watson, just one of the many salvos the two exchanged throughout the length of their fractious relationship. Yet the fans loved the "Gumper," admired his courage and appreciated his wit. Worsley worked 583 games with the Rangers, all of them without a facemask.

The Rangers Fan Club honored him three times with the Frank Boucher Trophy as the team’s "most popular player on and off the ice." The Metropolitan New York chapter of the Professional Hockey Writers Association twice named him the Rangers’ Most Valuable Player, in 1961 and 1963.

After ten years of being a live target with the Rangers, Worsely was dealt to his hometown Canadiens in 1963 along with Leon Rochefort, Dave Balon and Len Ronson for Jacques Plante, Phil Goyette and Donny Marshall.

The trade salvaged Gump's legacy as a lovable goalie on a terrible team to a legacy of Stanley Cup championships and a Hall of Fame nod. Worsley backstopped the Habs to Stanley Cup championships in 1964-65, 1965-66, 1967-68 and 1968-69. He was selected to the NHL's First All-Star Team in 1968 and to the Second Team in 1966. Worsley and partner Charlie Hodge shared the Vezina Trophy for lowest goals-against average in 1965-66. Gump and Rogie Vachon shared the same award in 1967-68.

Early in 1969 he suffered a nervous breakdown due to his petrifying fear of flying, the new norm in NHL travel thanks to western expansion. His career seemed to be over, but the expansion Minnesota North Stars took their chances with the goaltending icon by picking up his rights. The 40 year old goalie returned in 1970, playing some of his best hockey ever. His enthusiasm helped the Stars get into the playoffs for three straight years.

Gump ended up playing in 24 seasons, allowing a 2.91 goals against average in 862 games, and recorded 43 shutouts. He was enshrined into the Hall of Fame in 1980.

With files from the legends of Hockey, SI, Montreal Gazette, and the NYR Alumni Site