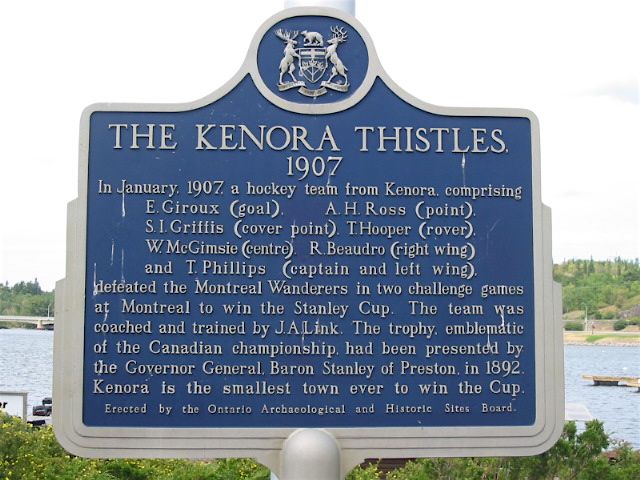 The Kenora Thistles won the Stanley Cup in 1907, the smallest town (population 4,000) to have ever laid claim on the mug in history.

The town was originally known as Rat Portage, Ontario. In the early 1890's, an amateur Senior hockey club was formed and a contest to name the team was held. The winning entry came from a Scottish carpenter named Bill Dunsmore, who submitted the nickname along with a drawing of a thistle for the team logo.

By January of 1896, several youngsters in the Rat Portage area between the ages of 11 and 14 formed a junior team. They became so good that they eventually beat the senior boys team.

Over the next five years, these young players joined the senior team earned themselves a reputation as one of the premier amateur clubs in the western Canadian provinces.

In 1903 they challenged the Ottawa Silver Seven for the Stanley Cup and lost the two game total score series 6-2, and 4-2. HHOF records have them named as the Rat Portage Thistles at this point and that was how their name was engraved on the Cup as opponents to Ottawa. In notes from the series of 1903, are claims that the ice was so bad due to mild March weather, the younger and speedier Thistles were disadvantaged against the tougher and more physical Ottawa team. In victory, members of the Silver Seven were each given a box of La Fortuna cigars. 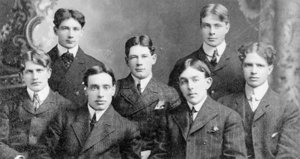 In March of 1905, the Thistles again challenged Ottawa for the Cup, faring somewhat better by taking the first game by a 9-3 score. Ottawa then came back to win the next two by scores of 4-2, and 5-4.

The challenges to the Silver Seven in 1905 are quite legendary. In the first, in January, the Dawson City Yukoners travelled 6,400 miles to Dey's Arena in the capital only to get pounded by 9-2, and 23-2 scores. The series had been set for five games, but after the second, the Yukoners literally quit and went home. Frank McGee tallied an amazing 14 goals on the night of January 16, 1905 - a record that will likely never be broken.

Two weeks after the series against Rat Portage, the Silver Seven held a banquet at the Russel Hotel to celebrate their Cup wins. Team captain Harvey Pulford, was among the many team members who had gotten drunk that night as the party spread outside the Hotel walls. Sometime in the late evening, he drop kicked the bowl onto the frozen Rideau Canal, where it was later recovered. Pulford was the heavyweight boxing champ of eastern Canada from 1898 to 1908.

During the summer of 1905, Rat Portage changed its name to Kenora.

After the Montreal Wanderers had defeated the Ottawa Senators at the end of the 1906 season and had captured the Stanley Cup, it was too late in the season to face the western champions. Thus it was decided by the Cup Trustees that Montreal would face the Thistles in a two-game, total-goal series midway through the ECAHA season.

The Thistles were up to challenge, winning the series against the Wanderers by scores of 4-2, and 8-6. The games were played at the Westmount arena in Montreal on January 17 and 21.

Game two was a physical affair with the Wanderers attempting to slow down their speedy opponents. Drawing 55 minutes in penalties, compared to the Thistles' 30, Montreal couldn't quite come back .

Prior to the series start, the Thistles had added two more future Hall of Famers to their roster, Art Ross and Joe Hall. The previous season, the Thistles had made great advances in the fundamentals of the game by lining their defensemen alongside each other, rather than placing one forward and one back as had always been the norm. 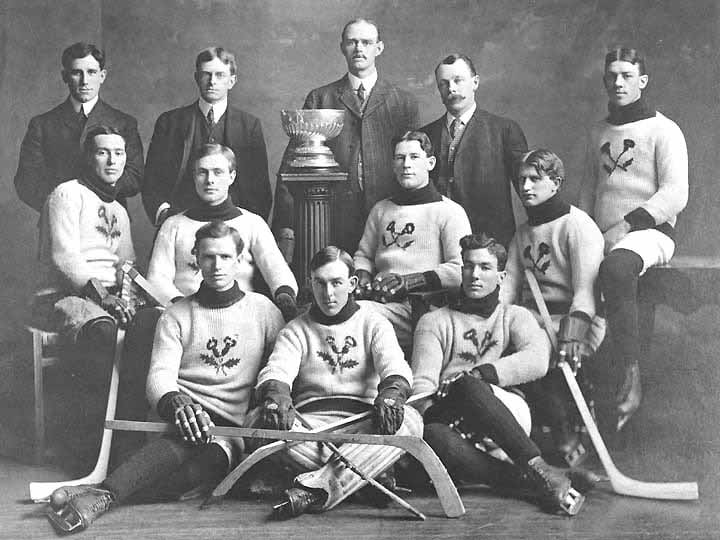 The Kenora Thistles reign as Stanley Cup champions would be a short one - a mere 63 days in fact.

In March of 1907, the Wanderers challenged the Thistles with a rematch, this time closer to Kenora turf, at the Winnipeg arena. Minus Ross, the Thistles didn't measure as well. Having added Fred Whitcroft, and Alf Smith and Harry Westwick from Ottawa under Wanderers protests, Kenora still lost by a total score of 12-8.

Having lost the first match 7-2, the Thistles needed to outscore the Wanderers by six in the second game and fell short winning by a 6-5 margin.

After losing the challenge, the remaining core of the Thistles disbanded in 1908, some signing elsewhere as free agents, with others choosing retirement. 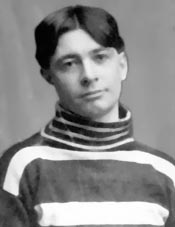 Harry Westwick was added in time for the rematch against the Wanderers. 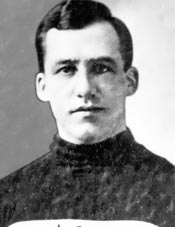 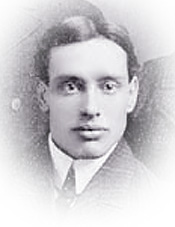 Roxy Beaudro was a late replacement for Theo Bellefeuille. His late goal in game 2, broke the 6-6 tie and was the eventually Cup winner. 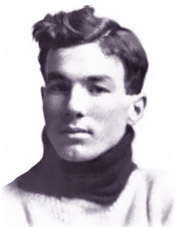 Art Ross had been a member of the Brandon Kings, and was paid a $1,000 by Kenora to play for them in this one challenge. His great rushes from the point were key to the Kenora win. Ross later played for Ottawa and ran a very successful sporting goods store in the city. 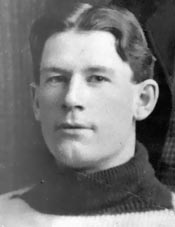 Tom Phillips, thought of as the best left winger of his era, scored all 4 goals in game 1 and a hat trick in game 2. Aside from playing in the '05 and '07 challenges, Phiilips also did the same in '04 with the Toronto Marlboroughs. 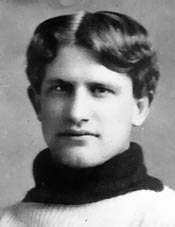 Billy McGimsie had been badly cut and bruised in the first series against the Silver Seven two years prior. He was known at the time for his skating and "dribbling", an early term for stickhandling. 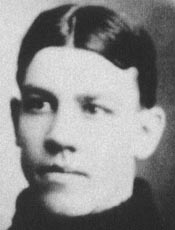 Joe Hall, while a member of the team, was not used in the series. 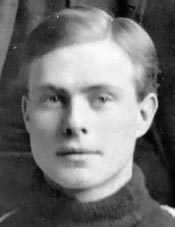 Tom Hooper was called the "vice captain" of the team, he scored five powerplay goals - 2 in the first half and 3 in the second - in the Thistles 8-6 win. 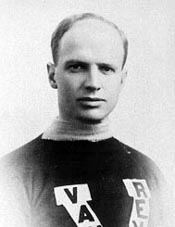 Si Griffis retired after the series, for 5 seasons before returning to the PCHL in 1912. He was born in Kansas in 1883 and moved to rat Portage as a youngster. He would go on to win another Cup win the Vancouver Millionaires in 1915. 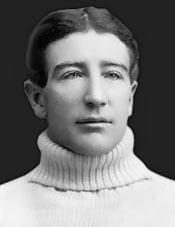 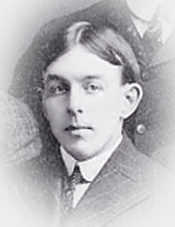 Eddie Giroux the teams goaltender, was the unheralded MVP of the two game showdown, performing brilliantly in the second game to upset the favored Wanderers.

For more information on the Kenora Thistles visit their homepage here and check out this site dedicated to the 1907 Cup Championship.

Many other players performed as Kenora Thistles and you can look them up at this link.