Ken Dryden: From the Mask of Mystery to a Briefcase of Boredom

Share All sharing options for: Ken Dryden: From the Mask of Mystery to a Briefcase of Boredom 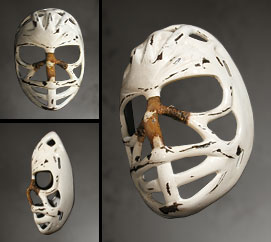 Today, the Canadiens will be raising Ken Dryden's #29 high to the Bell Centre ceiling. This jersey retirement is a long time coming for a goalie whose stats easily rank him with the best ever in the game. During Dryden's eight-season career, he won six Stanley Cups, five Vezina Trophies, the Calder Trophy, and the Conn Smythe Trophy. While appearing in 397 games, he won 258 of those, tying 61, and amazingly only losing 57 times in his entire career.

What I always think of first, when I hear his name mentioned, is his rapid rise to glory in 1971.

I was nine years old at the time, and the two hockey players I knew of best were Bobby Orr, of course, and an up-and-coming superstar named Guy Lafleur, who I'd seen play against my hometown Royals.

I clearly recall that my small-but-widening hockey world was packed with Bruins fans at the time, as Orr, Esposito and company were tearing up the league offensively. The defending Cup champs looked as though they were unstoppable.

In those days, when the Canadiens weren't televised, I would listen on the radio. Certain games were harder to fall asleep on than others. The night Dryden made his debut, the radio bristled with adjectives defining the lanky netminder's prowess. By the time I'd seen him play on TV, I understood what all the fuss had been about - this guy was huge! 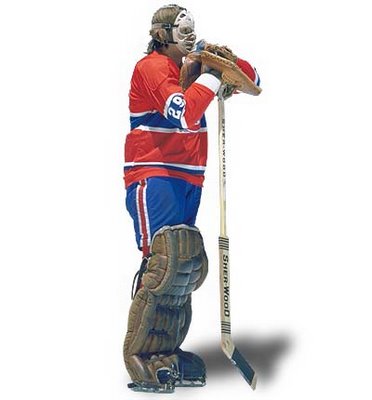 What wasn't well known about Dryden at the time was that he was winning games by himself for the Canadiens farm team, the Nova Scotia Voyageurs. Dryden had just finished four years of studying law at Cornell University, where he led the Big Red to some amazing seasons. Cornell lost just six regular season games during Dryden's tenure, two of which he did not play in.

The Montreal club could not help but take notice.

The Canadiens had finished in fourth place that year, 29 points and a world and a half behind the Big Bad Bruins. The Habs appeared to have a snowball's chance in hell of beating them in the opening round.

Looking back on it now, a pair of late-season changes paved the way for the Canadiens' fate - Dryden and the acquisition of Frank Mahovlich.

Dryden quickly became the name on everyone's lips as he stoned the likes of Esposito and frustrated the Bruins shooters throughout the series. I can still see Espo shaking his head while looking down at a sprawled Dryden, wondering how he'd managed to cross the crease so quickly.

Seven games later, the Bruins went home stunned, and Dryden was on his way to becoming a hockey legend. 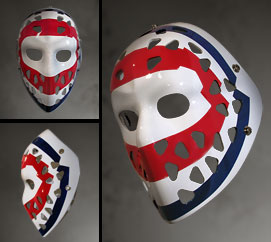 While Dryden's seasons after 1970-71 were consistently great, the element of surprise was never again so innocent in the eyes of a nine-year-old hockey fan.

As the hockey world learned more about the off-ice Dryden, it tempered somewhat the initial vision of a wild man goalie, acrobatic and spectacular, contradicted by moments of calmness and cool.

Dryden had become the greatest goalie in the game at the time, but resembled nothing short of a lawyer off the ice. We would soon all know the reason for that.

I remember many hockey discussions in my teens that involved the Dryden greatness. Was he making the Habs champions with his skill and agility, or were the Canadiens so deep in talent that any decent schmuck could have tended goal and fared almost as well.

On certain nights, that almost seemed like the truth. Admittedly, Dryden's worst enemy was his own complacency. It was almost as though the more he won, the more he became bored with it. The challenges for Dryden existed outside the world of hockey.

In 1979, Dryden hung up the pads, and it is said that he never donned goalie equipment again. When he appeared in charity efforts, Dryden oddly, was now a defenseman. 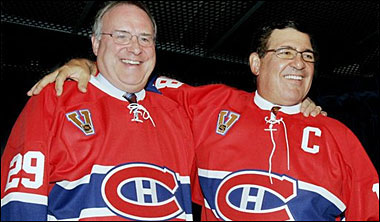 Soon he was an author, on occasion a hockey commentator, a lawyer, a Maple Leafs general manager, and finally a politician. Some may joke that each endeavor was a downgrade into the uppity sphere of self indulgence.

Tonight, when # 29 is yanked towards the ceiling of many immortals, I'll forget for a minute about the bespectacled chronic bore that Dryden became. I'll put aside visions of him with an attaché case. That an icy stare into hypnotized faces while he speaks to us is the politician who remains clueless about stay-at-home Moms. I'll try not to imagine that he was just recently a Prime Minister wannabe.

This evening, I will focus on that goalie who came out of nowhere. The rebel with a wild, bushy, scraggly mop of hippie hair sticking out of the fringes of a white, spider-fingered mask, and the mystery behind it. I'll think of Esposito and Orr, inaudibly swearing at him in 1971. I'll think of that cool cat, who perched on his goalie stick while the play was in the other end of the rink.

Maybe I'll do it with the sound turned down.

There's tons of great stuff online about Ken Dryden. Check out some of these:

Dryden's Wikipedia page [Wikipedia]]
A book review for The Game, a national best-seller and still a must read. [Indyish.com]
A one-on-one interview with Dryden [Legends of Hockey]
Great bio link with all of Dryden's stats [HockeyGoalies.org]
Pieces related to tonight's ceremony [CBC] [Canada.com]