It's Tag Time Again - If I Were A Hockey Player

Share All sharing options for: It's Tag Time Again - If I Were A Hockey Player 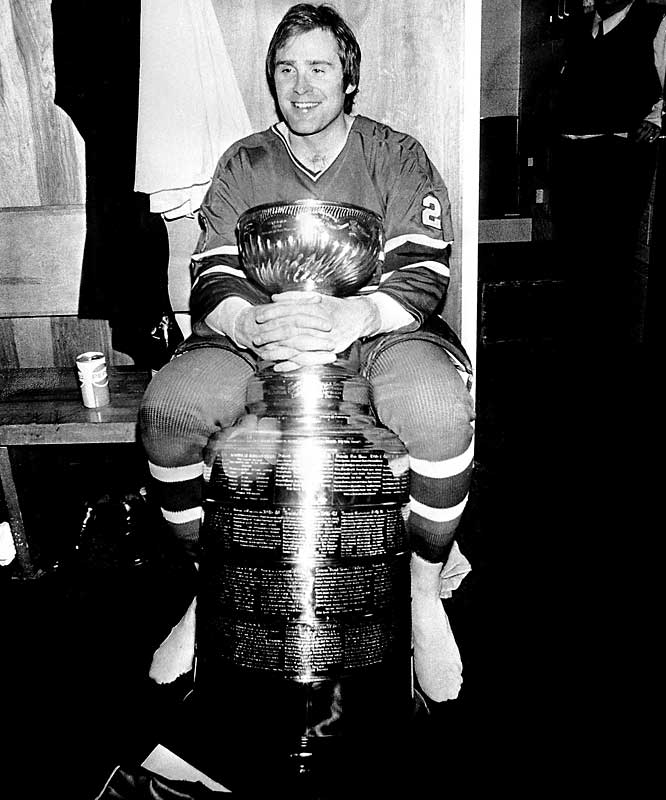 When I was 9, this is who I was in street hockey, but that was a long, long time ago...

I got tagged by Jes Golbez at Hockey Rants on his fun "If I Were A Hockey Player" meme. Filling it out reminded me alot of when I was a hockey player. Ah, the good old days of youth. Between filling this out and watching Dryden's number go skyward, I'm beginning to wonder if I am old already. Makes me want to visit my old man and drink him under the table just to prove my youth.

I'd like to pass this tag along to Joe Pelletier at Legends Of Hockey Network. I'd love to know who Joe would be. Joe you can e-mail me the answers and I'll post them into here, if you wish. I have a feeling Joe will be lined up between Bure and Kurtenbach. His reply will be very interesting.

Joe has a great post up right now in tribute to Ken Dryden, with four great links that are very interesting.

To that tag I'll add Matthew at Current Habs History and E at Theory of Ice, simply because they are making quick and studios work of Habs postgame summaries.

Keeping it Canadian and not at all, all Canadiens, I'll offer up the last two tags to Paul Kukla and Alanah McGinley at Canucks and Beyond. I'd expect something on a non-bipartisan side, but I'm sure it won't include any current or former Red Wings.

If I Were a Hockey Player:
Team: None but the Habs
Uniform Number: 17
Position: LW
Nickname: Longshot
Dream Linemates: Sidney Crosby in 2012, Brett Hull
Rounding out the PP: Sheldon and Nicklas
Job: Passing, puck dumping, penalty killing, irritating.
Signature Move: Drop pass, cut left and pass to the right, snarling at TV camera's.
Strengths: Passing, vision, duking.
Weaknessess: Florida Pathers Ice Dancers, feable shot, and diving fouls.
Injury Problems? Pulled groin
Equipment: Same old CCM shit I've worn for years, wooden stick, and a Reebok turtleneck that makes me 8% faster.
Nemesis: Darcy Tucker
Scandal Involvement: Florida Panthers Ice Dancers.
Who I'd face in the Stanley Cup Finals: In a different schedule Toronto for the same reason Jes mentions, if not, then the Red Wings
What I'd do with the Stanley Cup after our victory: Sleep with it, and win it again!
Would the media love me or hate me? Loved everywhere but Toronto.

UPDATE: The tag's gone well so far..2 for 5 and still waiting on Kukla, Alanah, and E.

Matthew at Current Habs History was the first to jump on the tag. You can read his answers here. By the sounds of it, I'd draft the kid myself, as long as Komisarek doesn't have to surrender # 8.

Joe Pelletier at Legends of Hockey also took my tag, flattering me in the process. Joe, who is a true gentleman, said, " I don't usually do these but I'll make an exeption for you and your site, since you've been so good to me and my site."

Being good to Joe's site, is really just about wanting everyone to stay atuned to the game's great history. It's always a pleasure to get lost at Legends.

There is little braggadicio is Joe's answers. The player that comes to mind when I read it, is Harold Snepsts, but off ice I believe Joe would be Jean Beliveau.

I know I'd play defense. In reality I'd be a 5th or 6th defender at best, but with a little dreaming leeway here I'll assume I can achieve a 4 spot status. I'd be very unheralded, very unnoticed. I'd be strictly defensive, happy to accept the one on one challenges and help the team. I would make a great first pass out of the zone, and if I could ever learn to skate maybe I could be a pretty nice player, maybe even as good as a Mark Howe or a Scott Niedermayer. But in reality I'd be a Keith Carney, or a Marek Malik, or a Dave Burrows.

Here's the following particulars:
If I Were a Hockey Player:
Team: Any Canadian Team or Original Six Team
Uniform Number: 19 in the NHL, 72 for Team Canada
Position: D
Nickname: none
Dream Linemates: Scott Stevens
Rounding out the PP: Not me.
Job: defense first, nice first pass, penalty kill
Signature Move: First pass.
Strengths: First pass, quick stick, good positioning
Weaknessess: strength, skating, shot.
Injury Problems? I hope not
Equipment: Wood stick, heaviest I can find. Mostly flat blade too.
Nemesis: Jagr
Scandal Involvement: Even if I was in a scandal, the media still wouldn't care about me.
Who I'd face in the Stanley Cup Finals: Toronto, the city would be amazing to be in if they ever got there.
What I'd do with the Stanley Cup after our victory: host a street hockey tournament, winners get the cup. Would the media love me or hate me? Wouldn't even notice me.
UPDATE: E has grabbed the tag and passed to Tapeleg. See Theory Of Ice and On Frozen Blog as they attempt to keep track of where this monster is heading. Readers are welcome to drop their submissions in the comment box.