The Picton Castle arrived in the West Indies on Wednesday after stopping at an undisclosed island to meet up with the father of Laura Gainey, who died after being swept over the side of the tall ship last month.

Bob Gainey is now back in Montreal where he has resumed his duties as general manager of the Montreal Canadiens for the first time since his daughter died Dec. 8.

Mr. Beauchamp would not comment on Mr. Gainey’s visit with the Picton Castle. "Mr. Gainey would like it to stay very, very private."

The former Canadiens captain spent Christmas with his other three children, Anna, Colleen and Steve, and visited his parents in Peterborough, Ont.

His mother Anne said it has been a difficult Christmas for the family. She confirmed her son flew south to meet the Picton Castle but she knew little beyond that.

Asked if the visit would have helped him, she replied: "I’m sure it did."

Ms. Gainey said her son has been informed of progress in the investigation but he has not shared that with his family.

"I’ve only seen him to say hello and goodbye," she said, adding it seems her granddaughter died in a "freak accident" during a bad night at sea.

Mr. Gainey’s sister Maureen Newby said she has had no contact with her brother since he left Peterborough more than a week ago. "It wouldn’t surprise me at all" that her brother flew down to visit with the Picton Castle.

Maureen Newby, Bob Gainey's sister, told The Canadian Press on Wednesday that the family hopes to learn more about the accident.

"It makes sense to me that it's investigated, because I have to ask, as a citizen, why was she not in a lifejacket? Why was she not tied to the boat?" Newby said. "I understand he and his family went to talk to the crew and the people who searched for her. They wanted to find out themselves what the crew did see and what really happened, from the people who were there." 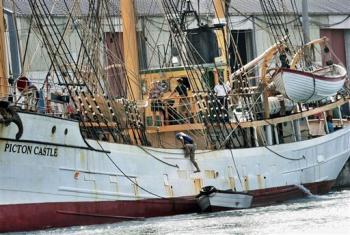 The captain investigating Laura Gainey’s death has been sailing with the Picton Castle, interviewing crew members and trainees who were aboard when the 25-year-old sailor was swept overboard off the U.S. East Coast, three days out of the tall ship’s home port of Lunenburg.

Officials with the Maritime Cook Islands, a ship registry, have not responded to e-mail or telephone requests for information on the investigation. The registry is heading the probe because the Picton Castle is registered in the small South Pacific country, midway between New Zealand and Hawaii. The registry is on Rarotonga, the largest of the 15 islands comprising the Cook Islands. The ship arrived in Grenada on Wednesday and is to resume its normal sailing schedule Saturday, said spokesman David Robinson.

He said the crew and trainees will do some island hopping in the Caribbean, sailing to Martinique, Antigua and Dominica, returning to Grenada in March.

"We are hoping they can resume business as usual, though it will never really be the same," Mr. Robinson said.
Among those aboard when the barque sets sail Saturday will be 13 students from Mount Holyoke College, a women’s school in Massachusetts. They will board the ship Friday night and spend the next two weeks learning piloting, navigation and seamanship before arriving in Martinique on Jan. 20.

Mr. Robinson confirmed the Picton Castle stopped at an undisclosed location before it reached Grenada to give the crew a rest. He referred all other questions to Capt. Dan Moreland of Lunenburg, who flew to Grenada to meet the vessel. There was no response by press time Wednesday to a Tuesday e-mail.

John Cottreau of Canada’s Transportation Safety Board said the agency is providing information requested by investigator Capt. Andrew Scheer, though the board did not know until Wednesday where to reach him.

"One thing’s for sure, though. His investigation will have the benefit of any information we’ve gathered," Mr. Cottreau said, including Canadian and U.S. search records.

Maritime Cook Islands said almost two weeks ago the preliminary investigation would take two to three weeks. Then the registry will determine whether a more extensive investigation is warranted.

Laura Gainey had been ordered to go below deck moments before a giant wave swept her into the Atlantic Ocean, the ship's captain said Wednesday.

She was wearing protective clothing but no lifejacket on the night of Dec. 8 when she went overboard about 475 miles off Cape Cod.

"She had been ordered to go below and moments later, the incident happened," captain Daniel Moreland told The Associated Press.

Moreland, who joined the crew after the loss of the 25-year-old Gainey, said he didn't know why she was above deck during rough weather. She had responsibility for certain watches and instruction of volunteer trainees.

Nobody saw the wave that knocked her into the ocean, but the crew immediately began rescue attempts after she was spotted in the water, Moreland said. Air and sea crews were unable to find her after a three-day search.

Michael Vogelsgesang, the captain who was in command at the time, has left the ship and is on leave during its winter program, Moreland said.

An investigation of Gainey's death was commissioned by the Cook Islands, the South Pacific nation where the ship is registered. The official leading the probe, Andrew Scheer, has interviewed crew members and "there will be further deliberations," Moreland said.