Share All sharing options for: Ill Habs Call Up Pair 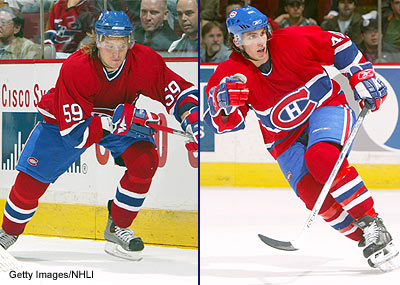 It is the third time this season that Lapierre, 21 has been recalled by the Canadiens. In his last callup, he had three goals and one assists in four games with the team. The 6' 2", 197 pound center from St-Leonard Quebec scored a goal in each of his last three games with the Canadiens including the game winner in Buffalo on December 19. He was chosen 61st overall in 2003, and has played 32 games with the Bulldogs, counting 9 goals and 12 assists.

Lapierre quickly became a fan favorite in Montreal with his inspired play and timely goals during his most recent callup. Many were surprised at his demotion back to Hamilton and the move caused an uproar that ate up newsprint for the better part of a week.

Grabovski has been described as a fleetfooted and shifty winger, able to control the puck at high speeds. The Canadiens were impressed to such a point with his developement over the last two seasons, that they gave him a three year contract, which is unusual for Habs prospects. Obviously the Habs see him in their plans not to far down the road should he continue to progress.

The callups were made necessary after the Canadiens cancelled practice Friday. Five or six players have come down with an intestinal flu.

"We don't have all the guys at the rink and that's why we didn't skate," said team captain Saku Koivu. "Hopefully they can come back on Saturday."

Coach Guy Carbonneau said he would have the players on the ice for a short skate Saturday morning to see which are able to play. He said the team would be calling up help from the minors.

Koivu said some were ill during a 5-1 loss in Washington on Thursday night, which may partly explain a listless effort.

"Some guys were vomiting during the game and other guys got the flu right after," he said. "Probably one reason we didn't play well was because some guys didn't feel their best."

Both goaltenders are healthy, and David Aebischer is to start on Saturday while Cristobal Huet will face the Devils on Sunday.